To visitors it is Canyon de Chelly, a scenic wonder of the Southwest. But to the Diné, it is Tséyi', "the place deep in the rock," a site that many have long called home. 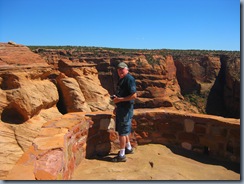 Millions of years of land uplifts and stream cutting created the colorful sheer cliff walls of Canyon de Chelly (pronounced Shay). The Ancient Puebloans found the canyons an ideal place to plant crops and raise families. The first settlers built pit houses that were then replaced with more sophisticated homes as more families migrated to the area. More homes were built in alcoves to take advantage of the sunlight and natural protection. People thrived until the mid-1300’s when the Puebloans left the canyons to seek better farmlands. 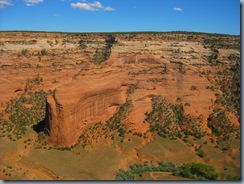 Descendants of the Puebloans, the Hopi migrated into the canyons to plant fields of corn and orchards of peaches. Related to the Athabaskan people of Northern Canada and Alaska (this would be our guide, JJ), the Navajo settled the Southwest between the four sacred mountains. The Navajo, or Dine' as they call themselves, continue to raise families and plant crops just as the “Ancient Ones” did. 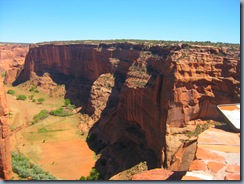 Canyon de Chelly National Monument was authorized in 1931 by President Herbert Hoover to preserve the important archeological resources that span more than 4,000 years of human occupation. The monument encompasses approximately 84,000 acres of lands located entirely on the Navajo Nation. 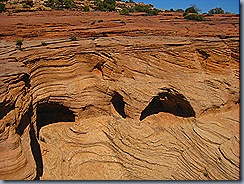 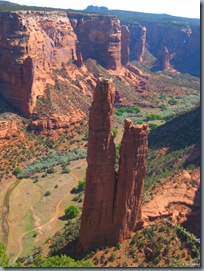 The Dine story of Spider Rock:

Long ago, the Dine Indian tribe named it Spider Rock. For many centuries the Dine built caves and lived in the cliffs surrounding this red sandstone monolith.

Spider Woman possessed supernatural power at the time of creation, when Dine emerged from the third world into this fourth world. At that time, monsters roamed the land and killed many people. Since Spider Woman loved the people, she gave power for Monster-Slayer and Child-Born-of-Water to search for the Sun-God who was their father. When they found him, Sun-God showed them how to destroy all the monsters on land and in the water.

Because she preserved their people, Dine established Spider Woman among their most honored Deities. She chose the top of Spider Rock for her home.

From their elders, Dine children heard warnings that if they did not behave themselves, Spider Woman would let down her web ladder and carry them up to her home and devour them! The children were told that the top of Spider Rock was white from the sun-bleached bones of Dine children who did not behave.