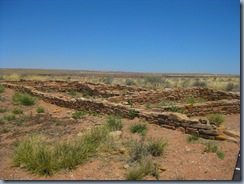 The Puerco Ruins are found in the Petrified Forest near the Puerco River. Moving from scattered, small villages into a large 100-room pueblo was one way that the Pueblon people adapted to a series of droughts from A.D. 1215 through 1299. 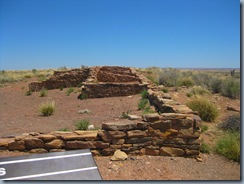 At its largest size around A.D. 1300, Puerco Pueblo may have been home to about 200 people within 100-125 rooms. The one-story high village of sandstone blocks was built around a rectangular plaza. Without doors or windows in the exterior walls of the pueblo, entry into the village was by ladders over the exterior wall and across the log, brush, and mud roofs of the room blocks. 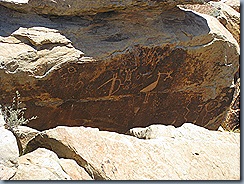 I found this information about one of the petroglyphs at Puerco Ruins. A unique feature at Puerco Pueblo is best viewed in late June, around the time of the summer solstice. Petroglyphs (images carved into a rock surface) and pictographs (images painted onto a rock surface) throughout the Southwest have been found to mark astronomical events during the year, such as the summer solstice, winter solstice, and both spring and fall equinoxes. 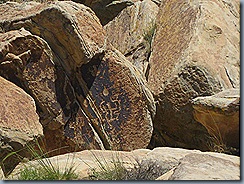 One such petroglyph can be easily viewed at Puerco Pueblo. For about two weeks around June 21, an interaction of light and shadow passes across the rings of this small, circular design as the sun rises.