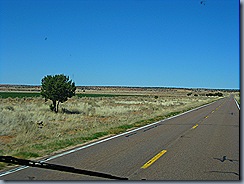 We left the desert, climbed up into a pine forest and have now emerged onto a high desert plain area. All of this within 200 miles from Phoenix.

I’m really not quite sure how to describe Holbrook. It’s located on the Mother Road, Rte 66. Has dinosaurs everywhere you look. And that is just about it. 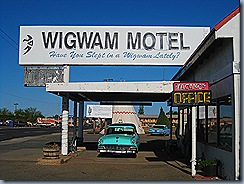 One of the neatest attractions in Holbrook is the Wigwam Motel. Yes, you can sleep in a teepee. I think that would really be a great experience, but since I have my own house and my own bed with me, we passed on staying there. Jim loved the old cars that were parked outside the “rooms”. I especially liked the 59 Impala because I once owned a car that looked just like this one. The history of this motel is quite interesting. Mr. Chester Lewis owned other motels along Old Route 66 in the 1930’s in Arizona. While he was in Cave City, Kentucky in 1938 he saw his first Wigwam Village. It had been built by Frank Redford.

In that time period, the term franchises or chain motels were not known of, much less used and Mr. Redford was more interested in sharing his novel idea than making money. Mr. Lewis and Mr. Redford came to an agreement that radios would be placed in each Wigwam that would play for one half hour for a silver dime.  Mr. Redford would then receive the dimes from the radios for a period of some years in payment for the use of his plans.

There were seven of these Wigwam Villages built from the 1930's to the 1950's from Florida to California. The Wigwam Motel was listed on the National Register of Historic Places on May 2, 2002. 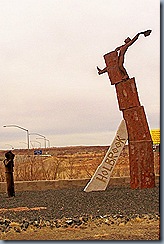 Also, in Holbrook is the Creepy 1898 Courthouse. The only reason it is creepy is because of the original jail cell that is still located in the building. The Courthouse has a museum in it, but we didn’t take the time to visit.