I'm sure you're all tired of reading about our medical issues but that is our life right now and I need to document it.

Radiation day 1 - Tuesday, January 4th, was Jim's first radiation treatment which lasted exactly 20 minutes from the time he went back to the time he walked into the waiting room. I know because I timed it. Yes, I was nervous and scared for him.

In fact our drive to Scottsdale takes longer than his treatment. 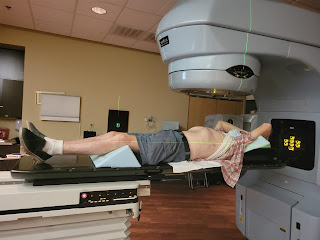 Absolutely no problem.  He didn't feel a thing and had no side effects.  He did say that laying on the hard metal table with his arms above his head is uncomfortable, but that was it.

He has four treatments to go with the last one on Monday, January 10.

Radiation Day 2 - Wednesday - today's session took longer and I was getting a little concerned. Jim told me that for some reason the machine did not want to line up correctly and they had to reposition him. Once again, he felt nothing and feels fine tonight.

Radiation Day 3 - Thursday - three down. Two to go. Feeling great but worried that it isn't working because he doesn't feel anything.

Radiation Day 4 - repeat of the other three days. One more to go on Monday.

Saturday and Sunday-experiencing some upset stomach. Not bad but uncomfortable.

Radiation Day 5 - done. Stomach still upset but hopefully that will go away in a couple of days. We go back in a month. 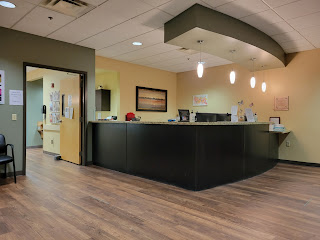 While sitting in the waiting room I observed people coming in who were doing their best to be brave as they fought this horrible disease. The lucky ones had someone with them to support them. My heart went out to those who were fighting by themselves.  My hope is that all of them come out victorious.