The senior living complex where Aunt Happy lives throws a yearly  dinner for the residents and their families. The theme was a Chuckwagon BBQ with hot dogs, chicken, and ribs plus sides.

Aunt Happy made sure we were dressed properly. 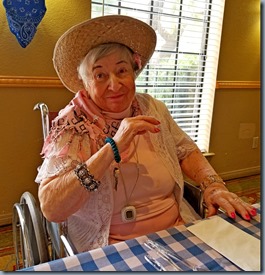 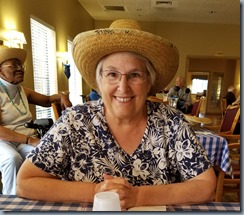 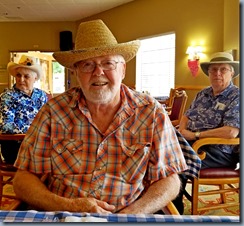 There were over 300 people attending the dinner and Jim and I stood in line for quite awhile to get our food. Jim handled two plates because we left Aunt Happy at the table. Nobody went hungry with all the food available. Jim tracked down the ice cream for dessert.

We also had entertainment while we ate. A cowboy singer and his horse, Dusty. That’s right, the horse was in the dining room with us and everyone from the youngest to the oldest loved him. 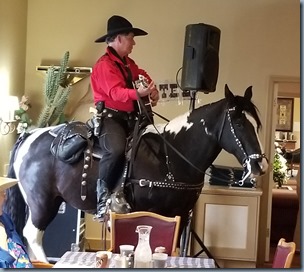 They have been entertaining around the valley for 15 years and Dusty was not bothered by anything. The wheelchairs, the walkers, the noise, the kids – nothing made him nervous at all. 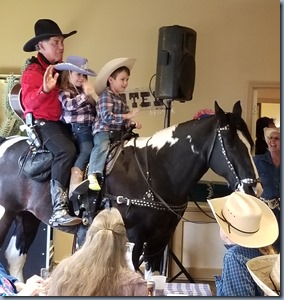 They also had a horse and carriage out front for anyone who wanted to take a ride around the buildings. Forgot to get a picture of him. Not sure many of the residents took a ride, but I’m sure the little ones had fun.

After eating, Happy was ready to go back to her apartment. We took her home and she informed us she was ready to get into her pajamas which meant it was time for us to leave. I’m glad we were here to share this time with her. 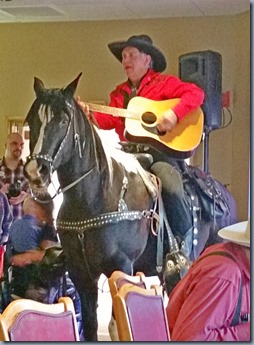 Prescription Issues, a Goodbye Lunch and a Bummer

I still can’t believe how our insurance works for prescriptions. Or doesn’t work.

I am taking prescription Vitamin D – one a week. Jim and Rocky always go to pick them up for me from CVS. The first time he brought home four pills that cost 39 cents. That’s wonderful. Then I finally got permission to have a three month supply at a time. On Tuesday the guys went to pick up my new prescription and the cost was $21.09 for 12 pills. I am not a mathematician but those two costs do not add up. If four pills cost about 10 cents a piece, 12 pills should come out at $1.20 or so.

For a change – an Arizona Sunrise 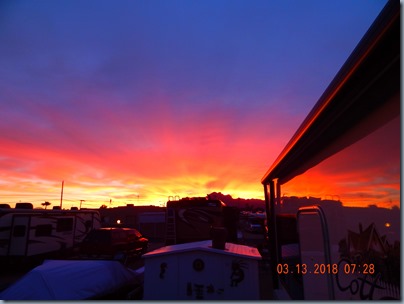 So back to the Pharmacy they went. The pharmacy person could not really give Jim an answer as to why the difference in price. Something about insurance. However, they did refund his original price and ended up charging him $1.29.

When he got home and told me about it I remembered hearing some news report that Pharmacies are not allowed by law to tell you that a prescription is cheaper if you don’t use your insurance. However, if you ask them about it, they can give you the information.

There’s a good news article about it at Gag Orders on Pharmacies. So my advise to you is to ask about the cost of the drug without using insurance. I know we will definitely be doing that from now on.

We were able to meet up with Jeri and Terry for lunch on Wednesday when they were able to find a few minutes in their busy busy schedule. We went to the Old Spaghetti Factory and it was really good. Fun to catch up with good friends and tell them to have a great summer. They are leaving around April 1.

Now for the bummer – We aren’t going to be able to leave the valley until sometime in June. Jim has to have cataract surgery on both eyes and his final appointment is on May 31. I really had hoped that this year we would be gone in early May but it’s not to be. But the good news is that Jim will be able to see really good when we go East next fall and that’s a good thing.

Bluegrass on the Beach

Jim climbed on top of the Bungalow to get me a couple of pictures of all the rigs attending the festival. The parking lot slopes slightly down to the river so you can’t see most of the rigs. We are parked at the top of the lot. 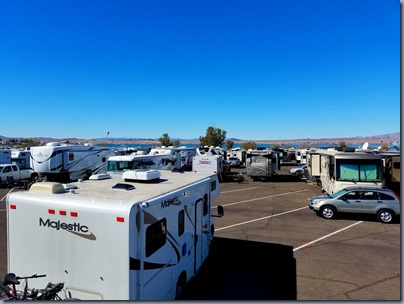 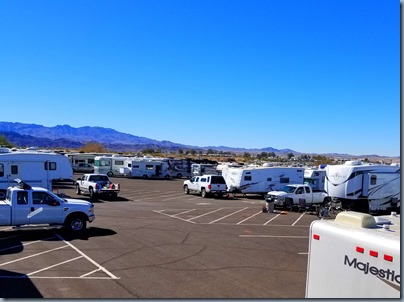 I don’t know how many rigs or people showed up but there were a whole bunch of them. 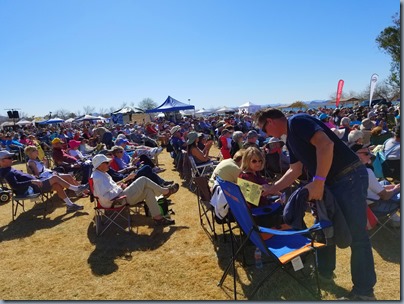 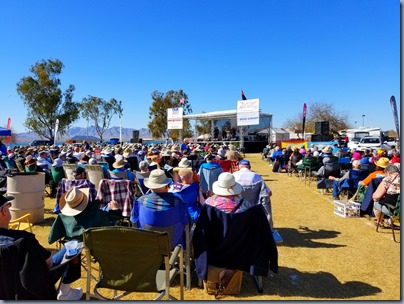 This is our group.

Back row: Ginny (with the visor), Mickey, Dave and Linda. 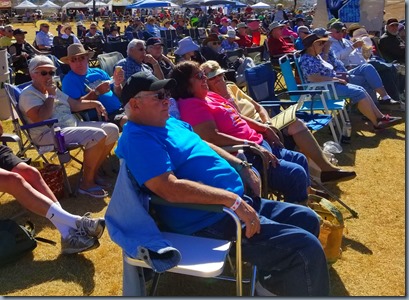 We took our chairs down on Thursday and just left them until Sunday. That’s when we realized that I had not been thinking clearly. We only brought two chairs with us and we needed four. Two down at the stage area and two up at our campsite. Jim made a quick trip to Harbor Freight and we were the proud owners of two new chairs.

There were lots of vendors selling food and crafts. Jim couldn’t pass up the ice cream vendor as we walked down to check out the beach. 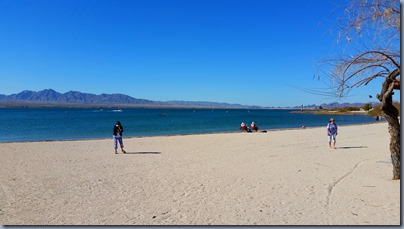 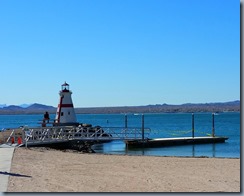 Lake Havasu State Park is a beautiful place and would be a fun place to camp for a week.

We had three days of fantastic bluegrass music. Out of all the bands that performed, I had two that became my favorites. One was the Jerry Butler Band. They performed a Gospel song called “Beyond the Rain” that really touched my soul. You can check it out on You Tube. Beyond the Rain 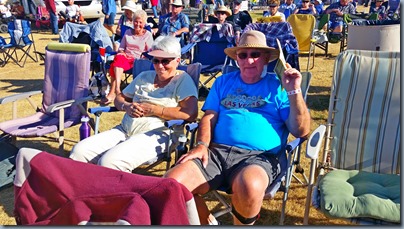 The other group was Wayne Taylor and Appaloosa. Wayne and another band member performed with the Navy Band Country Current for something like 20+ years. Jim and I went to a Country Current Concert in Billings before we retired. Wayne has an incredible voice.

We had beautiful sunshine all three days but the wind was blowing really good the whole time. One of the performers hat blew off several times while on stage and they had trouble keeping the instruments in tune. 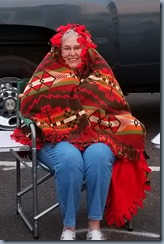 In the evenings we had pot lucks. We had tacos, spaghetti, incredible desserts, and everything in between. But with the wind blowing, as soon as the sun went down it got cold in the desert. Here’s proof. Thank you Ginny for the warm blanket. It was greatly appreciate.

We headed home on Monday and are making plans for next years show. 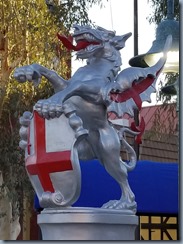 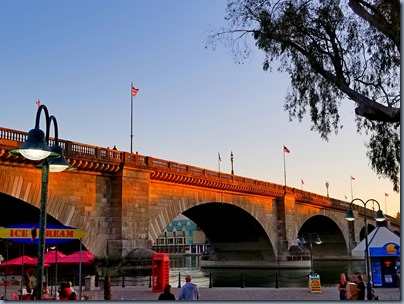 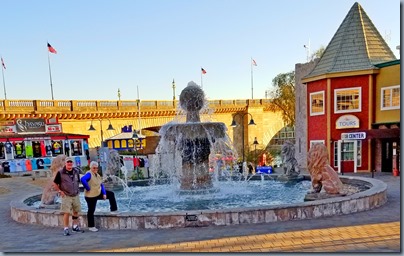 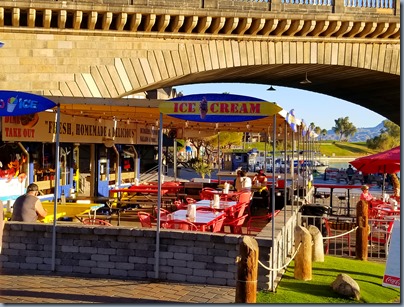