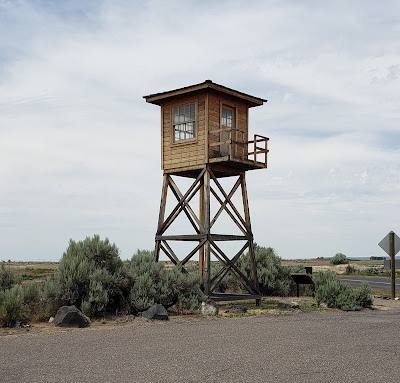 We left Wells Friday morning for our next stop in Jerome, ID. The weather folks were saying that a storm would be moving into our route and we wanted to find a spot to sit til the storm passed - preferable a spot with no trees.  The fairgrounds in Jerome were just the place to be. $10 a night for electric and water. Pretty? - well it's a parking lot. But the fairgrounds are green and well taken care of. That works for us.

The storm was supposed to come through on Saturday but it stalled out somewhere and now it's supposed to show up Sunday and Monday. We had one severe weather alert but that system went south of us. So now we are waiting to see what happens today. We will be leaving here on Tuesday heading east and north.
Since Saturday turned out to be a pretty nice day we decided to do a little sightseeing. We spent time in this area back in 2012 but when we were here at that time, Shoshone Falls were dry. 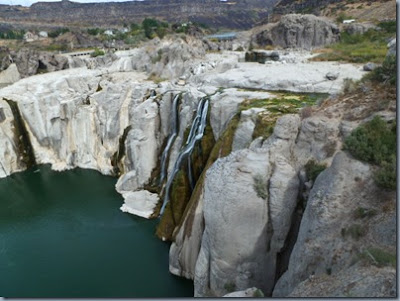 We figured we would see if there was any water flowing this visit. Shoshone Falls are referred to as the Niagara of the West. They are 212 feet tall and 900 feet wide which makes them taller than Niagara Falls.

What a difference this year. The Falls are beautiful.

The road down the canyon to the viewing area is narrow and winding but they allow RV's on it. (Not our RV).  The walls of the canyon are beautiful. 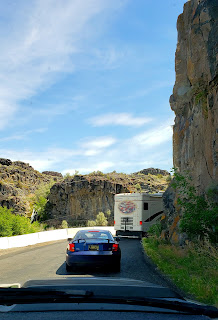 There were hundreds of people at the Falls with very limited parking and they were not controlling the number of cars heading down the canyon. So when you got to the bottom there was no place to park. Unless you're Jim. He never fails to get a parking spot. Not one of the hundreds of people there was wearing a mask. But I put mine on to go take the pictures. Jim stayed in the truck away from people. Needless to say it didn't take me long to get the pictures and we left, freeing up one parking spot for the twenty cars we passed going down.

Looking down river from the Falls. There were too many people down on the viewing stand so I didn't go down there.

We made one other stop but that place deserves its own post.

I Don't Think I Can Take Much More Excitement

Wells, NV   High 89  Low 58
Last night was supposed to be a calm, peaceful time. We made the trip of 140 miles from Ely to Wells without any mishaps (except for all the panting, pacing, and whining that Skittlez does). We stayed at a Passport America campground - Welcome Station just a few miles west of Wells.

Those of you who have followed my blog for years know that I much prefer wide open campgrounds with no trees. Sometimes I don't get what I like. The trees and grass do make for a really pretty campground and Welcome Station has plenty of both. We got a nice long pull through that was quite level and under a huge tree. No idea what kind.
We watched a huge fifth wheel with a medium duty truck pull in and get parked. I was nervous for them. But they got it in a spot and I have no idea how they are ever going to get it out. Our neighbor was in a rental RV. Mom, Dad and two little girls.
Everything was going along just fine until the wind started to howl. We were really rockin' and rollin' for awhile. The wind finally moved off and then took a sudden turn and came back with a vengeance. This time it brought rain with it and attacked the trees in the park. It sounded like we were being hit with baseball size hail when the branches came down on us. I was sooo not happy.
This is the smallest of the branches because the owner had already taken care of the big ones. 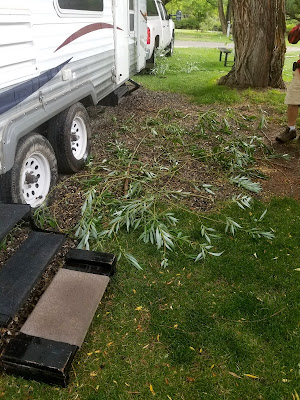 The park owners were out cleaning up the park before the storm even ended. They really are nice and take excellent care of their park. The owner even offered to climb up on our roof to check out our solar panels for damage but Jim decided he would do it himself.

The solar panels were okay. Nothing broken. 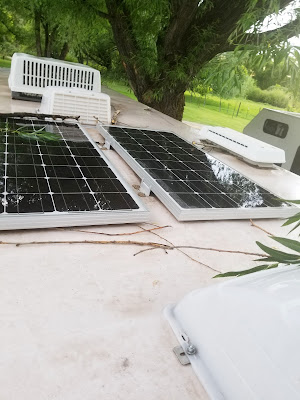 Jim checked everything out.

The owner loaned him a broom to clean off the slide out.

The calm after the storm. Our view. 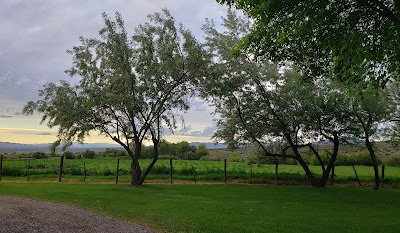 Ely, NV   High 86  Low 54
Ely was established in the 1870s as a stagecoach station and post office on the road to Pioche.  And then copper was discovered and the town started to grow. In 1915 Kennecott Copper bought up the mines and their dominance lasted until 1978 when everything shut down. They did leave behind the Nevada Northern Railroad. 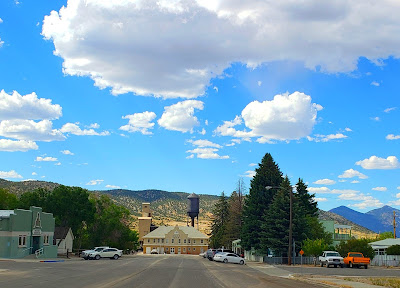 We rode the train from Ely to McGill and back several years ago and with Covid-19 around, we decided not to take that trip again.
I did, however, convince Jim to take a ride around the town and up the hillside so I could get some pictures.

One of the last remaining copper smelter smokestacks. 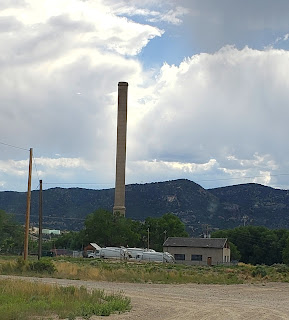 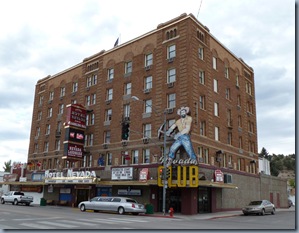 The mural was painted by Larry Bute to bring life back to downtown Ely.  The dark clouds moved in and did not make for a good picture. This is downtown main street. 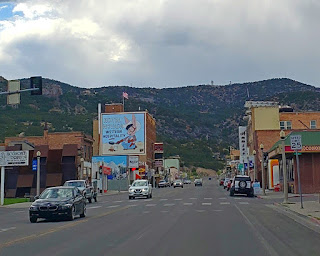 The inverter arrived yesterday as planned. Jim got it installed and we left this morning. We are spending tonight in Wells, NV.  Back on the road in the morning.

More Fun On The Road

Ely, NV  High 85  Low 48
While parked at our beautiful spot at Stampede Campground, there were a couple of issues. The first one was the jet maneuvers from Nellis Air Force Base. There are signs warning about low flying aircraft and they aren't kidding. We had one jet go over us that felt and sounded like he was about ten feet above us. Even scared Skittlez and she is deaf. However, the maneuvers only went on for a few hours one day.
That bare spot up on the hill is where we were camped. 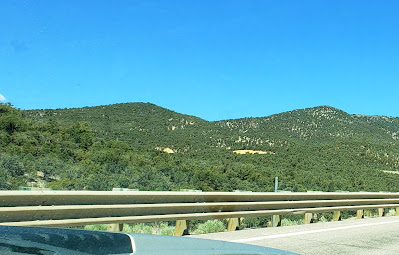 The other issue is our inverter decided to quit working. We watch TV, run our fan, and most important, run Jim's CPAP machine using the inverter. Without the inverter we can't boondock; we need electric in order to run the CPAP. Jim made several phone calls to Twin Falls, ID trying to find an inverter but nobody had them in stock. He found one at Amazon but it would not be delivered until next Wednesday. No next day delivery out here in the middle of nowhere. We called Valley View RV Park in Ely and made arrangements to spend a week with them until the new inverter could be delivered.
So here we sit in Ely. We have spent time in Ely previously when we rode the Ghost Train (Nevada Northern Railway Museum)   and explored the Ward Charcoal Ovens.  So staying isolated is not a problem.
We have had some more issues while waiting. I want to keep all of this information so I am blogging about it where I know I can find it again.
First, Jim didn't feel well. In this coronavirus world of ours, this is really scary. However, whatever bug hit him, it didn't last more than two days. And I think a lot of it was brought on by stress.
That's right - stress. Sunday morning Jim was going to go get drinking water and the truck would not start. Deader than a doornail. He checked both batteries (diesel trucks have two batteries) and they were definitely not cranking anything. He hooked up the battery charger to one battery and the generator to the other one. We had purchased these batteries in Mesa in February of 2018 at Batteries Plus. Well, the closest store is in Twin Falls, ID. Jim spent some time with them on the phone and they do have the battery and were able to contact the Mesa store to determine that they were under warranty.
Battery Update: Batteries Plus in Twin Falls called us back when they determined they don't have the battery we need. So we will have to have it ordered when we get to Canyon Ferry.
They also discussed the fact that it might possibly be our alternator. It took several hours for the batteries to charge but finally the truck started and Jim headed for NAPA here in Ely to have them check the batteries and alternator. All of them seemed to be doing their job except one battery was not putting out the cold cranking amps it should be.
And the fun continues - the grey tank valve is broken and needs to be replaced. Our sewer hose has a hole in it which Jim will be fixing before we need to dump again.
The weather has been really nice. In the 80's every day with a breeze and down into the 50s at night. This RV park has lots of permanent people living here but they have kept the front rows for overnighters (or in our case seven dayers).
Valley View RV Park

We are in the middle of the picture on the left side in the Salem travel trailer. We would definitely stay here again.