Most of you know that Jim’s two favorite things (besides me and the pups) are fishing and NASCAR. And the best part of NASCAR for him is being able to drive really fast.

I had used a Groupon to buy Jim a Rusty Wallace Racing Experience out at Phoenix International Raceway. He was scheduled for last spring but it was pouring rain and he had to reschedule. So last Saturday was the day.

I knew Jim was going to be gone for several hours so I stayed home with the pups. But Jim wasn’t going alone – our really good friend Paul is here and was looking forward to seeing what it was like down in the pits. 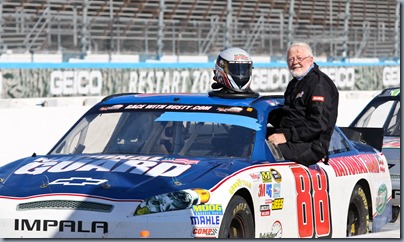 Paul has this really fancy camera and agreed to take pictures for me. At the track they have a photographer taking pictures of the participants which they then are wiling to sell to you. They tried to get Jim to pose but he told them that he had his own photographer. They don’t give up easily but when they finally looked over at Paul, they immediately agreed that his camera was probably better than theirs. 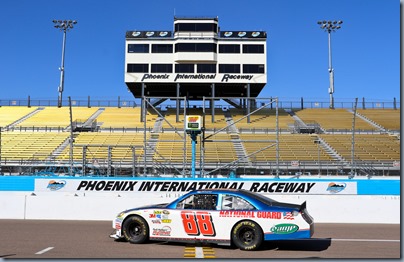 They have a driver’s meeting and explain how everything is done to ensure the safety of everyone involved. Jim has driven twice before – once in North Carolina and once at Phoenix so he had a pretty good idea of what to expect. 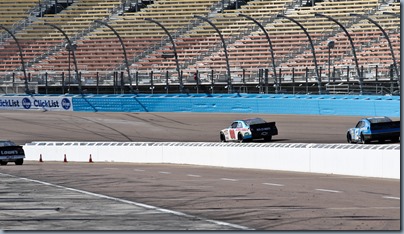 The excitement builds. Jim checks out all the cars going around the track but he’s especially interested in the #88 which is Dale Earnhardt Jr.’s number and is Jim’s NASCAR driver. There are two #88 cars on the track. One (green) is a drive car and one (blue) is a ride along car. The ride along car is driven by trained drivers and is allowed to go faster than the drive cars. 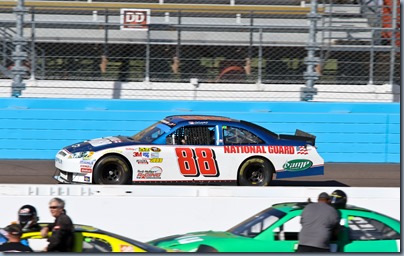 As he’s standing in line, the guy calls out his name and asks him if he had purchased the car upgrade option (which I had). Jim said yes and the guy told him he got to drive the #88. So Jim figured he’s be in the green drive car but no – because of the upgrade he gets to drive the blue ride along car. WOW! At this point Jim’s excitement is beyond words. 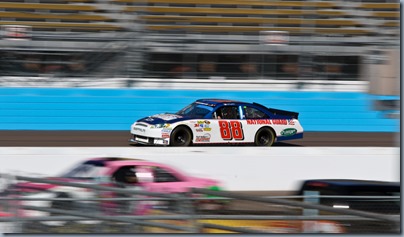 He had the 12 lap shoot out experience and it was over way too fast. It doesn’t take long to get around the track when you’re driving 140 mph. He also got to pass two other cars on the track which just added to the excitement. 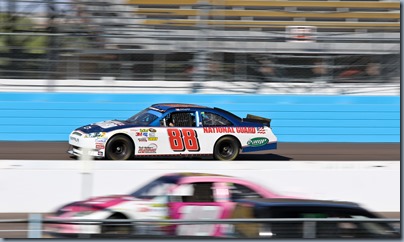 There is no one in the car with you – just your spotter talking to you over the headphones. He advises you when you’re coming up on a slower car and lets you know when it is safe to pass. He also warns you when a ride car is coming along and is going to pass you. Safety is definitely their priority. 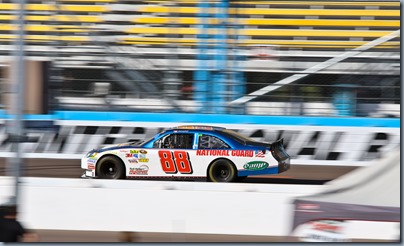 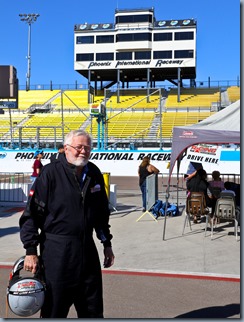 See that grin? It took Jim several days to come down off that adrenalin high. Hopefully he gets to do it again when I can find another great Groupon deal.

Thanks Paul for taking these fantastic pictures for us. 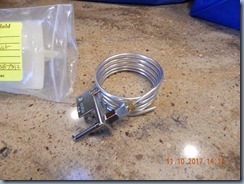 Hard to believe Aunt Happy is 104 and still going strong. However, we did see some deterioration in her ability to walk and speak. She had a physical therapist with her when we got there who is making her walk and do some leg exercises. She has a little more trouble getting her thoughts out into words but her thoughts are still very sharp and aware. She’s really happy we (especially Jim) are back in the Valley and not too far away. She always has little chores for Jim to do – like change a battery in her clock or restring her bead necklace. 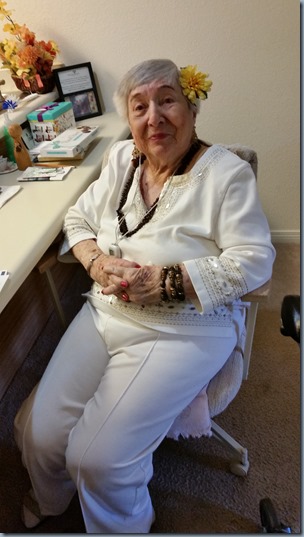 Skitz is so happy to be back in the land of sunshine and hot rocks.

We had purchased some road runner statues when we were in Mexico a few years ago. They were brown and rather sun faded, so we enlisted the talents of our daughter-in-law, Michaela. Here is the result of her work. I thought we had a picture of the “before birds” but we can’t find it. Michaela has an amazing ability to put color together to create works of art. 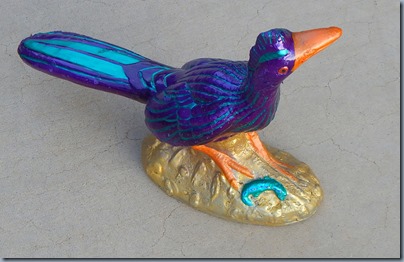 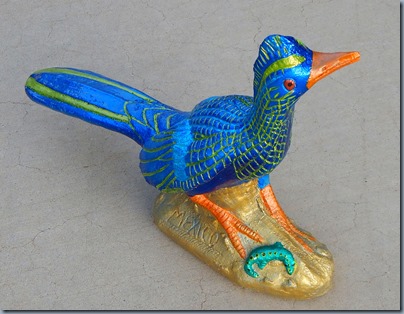 Jim and Marv went fishing. Didn’t catch any fish but found a few small things that needed to be repaired on the boat. Jim has got most of the repairs finished and hopefully will be back out on the water next week.

Skittlez loves these cooler mornings because she gets to lay in front of the fireplace. 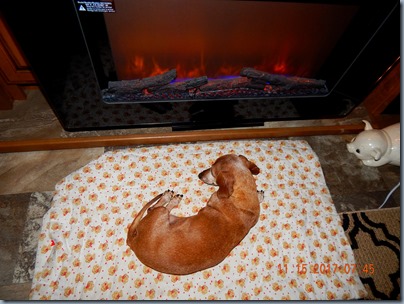 Or snuggle on the couch with Rocky Joe. 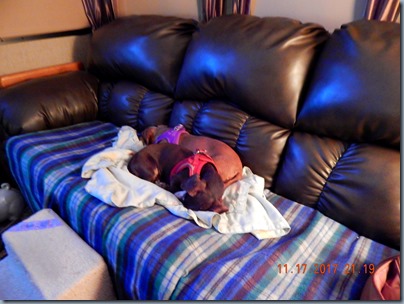 Still catching up on doctor appointments. Just amazes me how many times we have to see doctors anymore. Thank goodness we are still having good times catching up with friends in between appointments.

Sure do love these Arizona morning skies. 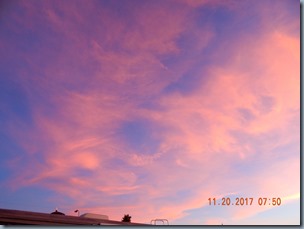 Just Some Thoughts On This Sabbath Day

As I was sitting in church this morning during our Sacrament Service, I looked around me at all the people who were there – the families, the young singles, the older couples, the widows and widowers – and thought about those people in Texas who were in that church worshipping God when a man under the influence of evil, destroyed all of those lives and changed the lives of people everywhere. How easily it could have been us.

Today was our testimony meeting where members of the congregation go to the pulpit and express their love and faith for our Heavenly Father. One little girl, probably about 8 years old, got up and touched all of our hearts with her simple faith. She said “I love God. And God loves me.”

And a little child shall lead them. We do not know when our mortal life on this earth will end but we do know that if we have lived worthily we will be welcomed back within our Heavenly Father’s arms.

As Pastor Pomeroy said today in his sermon in Texas.

“I know everyone who lost their life that day. Some of which were my best friends, and my daughter, and I guarantee without any shadow of a doubt they are dancing with Jesus today. God gets the glory.”

Back to the Routine

I’ve been having internet issues. Our Verizon signal is almost non-existent here in our spot and we’re not sure why. Jim spent hours on the phone with Verizon and got no where. Took my computer in and had it all cleaned up and fixed. Still have a lot of trouble getting on line and loading web pages or pictures takes forever if they will even load. Very frustrating.

We have settled back into our routine of doctor appointments and catching up with friends we haven’t seen all summer.

We went to lunch with Paula who has returned to the valley. Then we had lunch with Toni, Doug, Jeri and Terry. Got to see Jeri and Terry’s new fifth wheel and it is gorgeous. We’re trying to figure out when we can get to Casa Grande to see Toni and Doug’s new motorhome.

Doug took this picture for us. We were at Can’t Stop Smokin’ BBQ. Love that place. 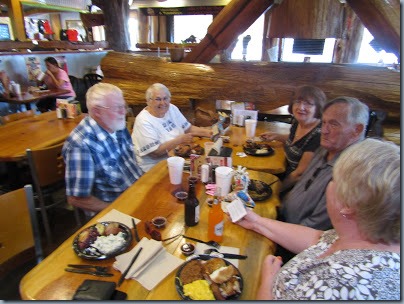 Between us and the pups, we have had doctor appts almost every day except for the week-ends. Hopefully next week things will calm down and Jim can do some fishing. He hasn’t even had the boat out once yet.

Jan and Bill also came for dinner one night. So much fun to catch up with folks. They had given us a pillow with fish on it when we first got our fifth wheel. Skittlez has decided to claim it for her own. 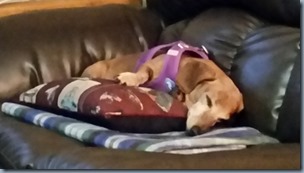 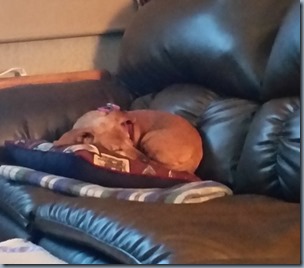 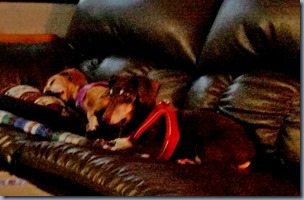 Hopefully I can get caught up on blogs some day.