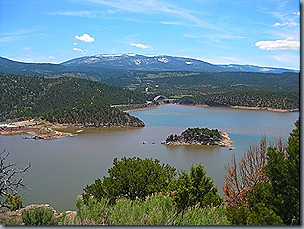 Flaming Gorge Dam rises 502 feet above bedrock, and forms the reservoir from the water of the Green River. The reservoir extends 91 miles to the north from the dam. Flaming Gorge is about equally in both Utah and Wyoming. 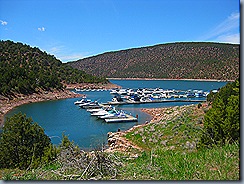 On a spring day in 1869,  John Wesley Powell and nine men boarded small wooden boats at Green River, Wyoming to embark on a daring exploration of the Green and Colorado Rivers. Powell and his men slowly worked their way downstream, successfully completing their journey in late summer. It was on May 26, 1869 that Major Powell named the Flaming Gorge after he and his men saw the sun reflecting off of the red rocks. 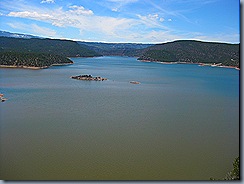 We didn’t see much of the flame because once again the weather didn’t want to cooperate. But – it was really nice because there wasn’t anybody in the campground except one fifth wheel. It was so quiet and peaceful. I loved it. 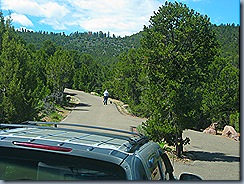 We camped at Cedar Springs Campground and found a couple of spots that we could squeeze into. Our motor home is 37 feet and most of the sites in National Forest Campgrounds really aren’t long enough for us. But we persevered and found a beautiful site. It really helped that there weren’t any other campers in the campground. 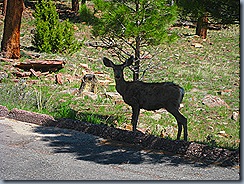 We had deer for neighbors and a yellow belly marmot but he moved too fast for me to get a picture. Sure was a pretty fellow though with all that gold fur on him. 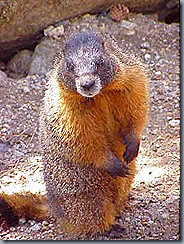 I found this picture of him on line.

Jim always wants to check out the fishing anytime we are near water. Because the reservoir is in the mountains, the water stays quite cold all year and the main fish is trout. Jim isn’t really a trout fisherman – he prefers walleye or bass. But he did drop his line in the water and let his bait get wet. No bites.

A wonderful couple of days with lots of quiet time. I needed that. 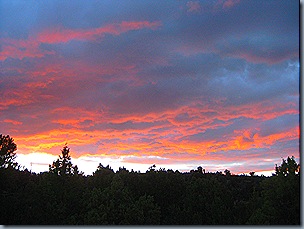