We are on our way back to Arizona but needed to make one last post on Billings.

As parents and parents-in-law of very talented adults, that gives us the right to brag about their accomplishments.

Todd (like his father) is a car nut. He is really involved in remote control car racing which means he has to build and design and paint his own cars.I'm amazed at his abilities to create such realistic models. And he does it by finding really good buys at second hand stores and on sale. (We taught him well.) 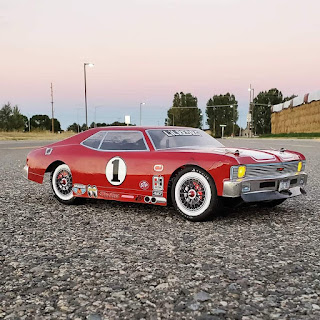 He also has become very adept at stenciling. At least I think that's what is it. He made this for me. 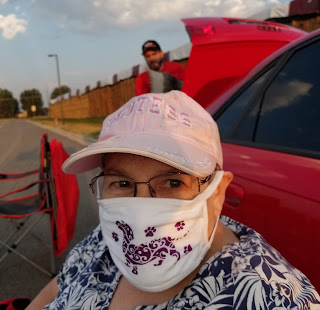 Our daughter-in-law, Michaela, is beyond talented. I've shown you several of her works in the past but this one is by far her greatest masterpiece.  She painted this for Jim for his birthday. His velcro dog Rocky Joe. 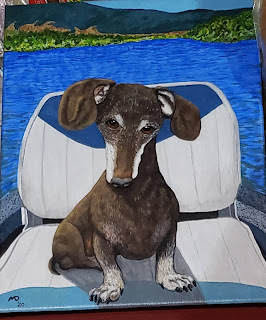 Thank you Todd and Michaela. We love you and are going to miss you so very much. 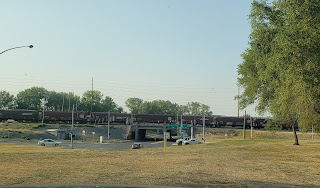 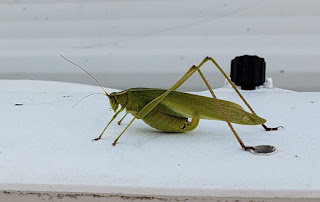 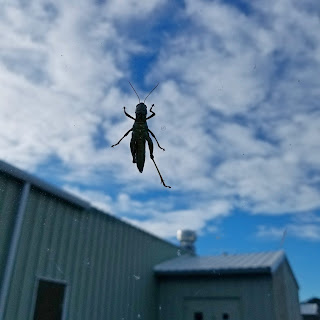 Roller coaster weather - that's what we've been having. Last Saturday we reached a record shattering 103. Previous record was 95 set back in the 50s.  Today - Labor Day - our high is going to be 48 with a low of 35. So we dropped 55 degrees in 48 hours. They are predicting snow in the higher mountain elevations. We are also getting rain today and we're hoping for enough rain to really help the firefighters get control of all the fires burning in the state.

Todd has become quite involved with remote control car racing which is gaining in popularity here in Billings. I don't understand any of it but he does whatever he can do to make the car go fast, paints it in special paint jobs and decals, and spends a lot of time learning how to make it get around the track without wrecking. The club did not have any events organized while we are here but Todd got some of the guys together for some drag racing and practice runs. It was fun to watch everybody race their cars and have a good time. 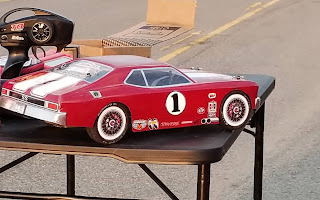 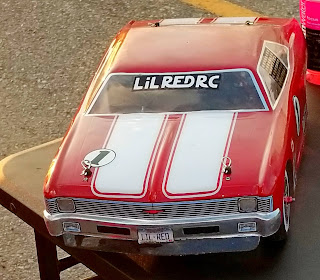 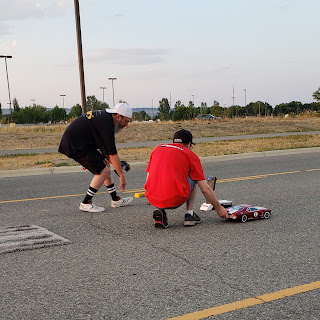 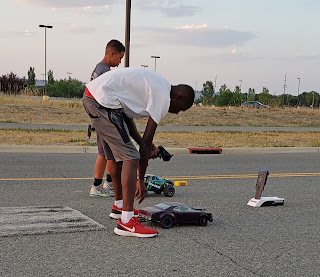 And the sun sets on the race fun. Well it did for Jim and I anyhow. The rest of the "kids" stayed until about 10 or so. 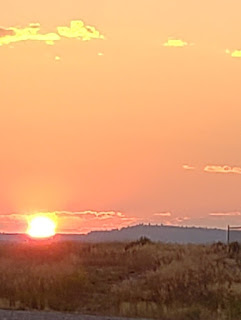 We celebrated Labor Day on Sunday (since it was going to rain all day Monday) by grilling chicken wings with corn on the cob and mashed taters at Todd and Michaela's house. 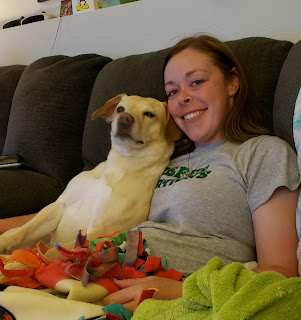 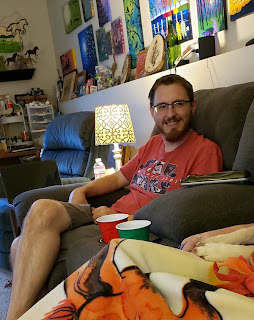 Zoey stole my heart the first time they brought her home as a puppy. She loves her Grandmas and turns into a lap dog when we show up to visit. 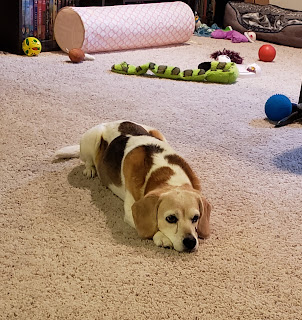 Backroads To Billings (at least part of the way)

We left Canyon Ferry and headed out on Highway 12. Leaving Townsend you enter the Helena National Forest. It's a beautiful, curvy road through the Lodgepole Pines.

When you exit the forest, the plains are in front of you as far as the eye can see. They are a beautiful golden color this time of year.

After turning south on Highway 89, you'll find the little town of Ringling.The town was founded by John Ringling, one of the brothers of the Ringling Brothers' Circus, as part of his plan to build a railroad connection between Glacier and Yellowstone National Parks. For some reason, only a twenty three mile stretch was built between Ringling and White Sulphur. When the railroad did not extend any further, Ringling lost most of its population. This is what is still standing. If we had had time, I would have loved to drive down that main street.

Do any of you remember the Jimmy Buffet song back in 1974 on his "Living and Dying in 3/4 Time" Album - Ringling, Ringling? This is the town he was singing about. So I've been playing it on YouTube while I do this post. Check it out.

One building still standing is out by the highway. .St. John Catholic Church which was built in 1914 and sits on a hill overlooking the town. No longer used as a church, a grant was issued to help restore it. 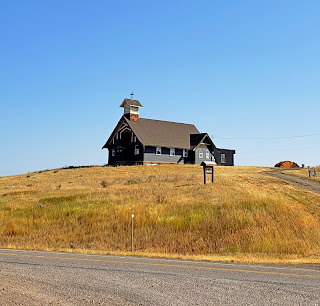 A little further down Highway 89, just before you get to Wilsall, you will find Thunder Jack. He was sculpted by Gary Kirby to commemorate the mountain men of Montana. The first grade class of 2006-07 got to name him and thanks to them we have Thunder Jack.

The sun was not in the right position to get a very good picture when we stopped. Notice all the smoke covering the mountains in mine. The second picture was taken by James Cowlin and is much better than mine. 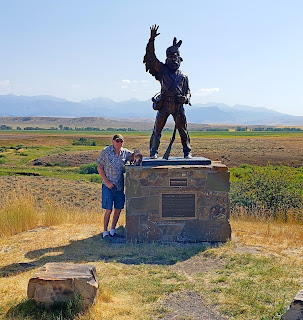 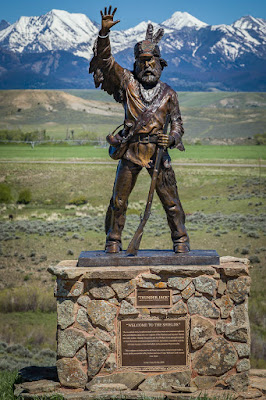 From Wilsall we dropped down to I-90 and headed on to Billings. We stopped to get fuel in Big Timber and thought about Janna and The Cowboy up in the mountains.

We are currently at the Moose Lodge in Billings. Not sure how long we'll be here. Get to visit with the kids some more.

It's hard to believe we have been here for almost two months. We will be moving on to Billings, MT so it was time to put the boat to bed for the winter. This post just has a few random photos.

The laundromat we usually use was closed so the owner could go fishing. That meant we had to find another laundromat. Found one across the street from the train depot in Helena.

This sign was posted on the bulletin board in the laundromat and caught my attention. 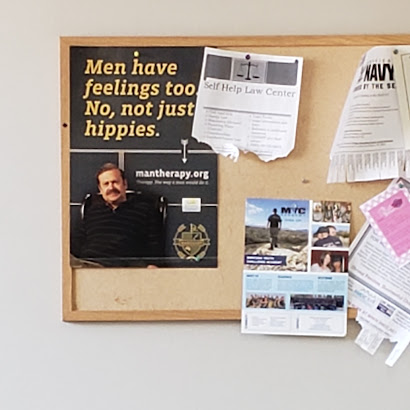 So men, if you need to learn to express your feelings and you're not a hippie, check out the website.

Some days the water in the lake was smooth as glass. 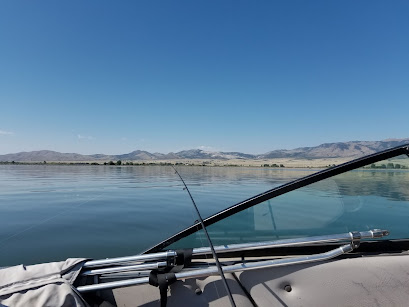 Spiders were a big problem this year at the campground. We've always had spiders but this year they were really bad. Jim had to wipe down cobwebs every day from the truck, boat and Bungalow. They have also invaded the Bungalow so when we get back to AZ and get everything unloaded we will be doing some bombing. I know they are good to have around to keep the mosquito and other bugs under control, but I am not happy when they invade my home. 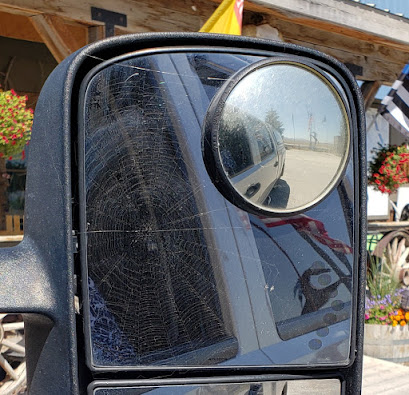 Our turtle. Skitz fell out of her bed on her back and just like a turtle, she can no longer get herself upright. Poor old dog. But of course, I had to take a picture before helping her get back on her feet. The next post will be on our way to Billings. 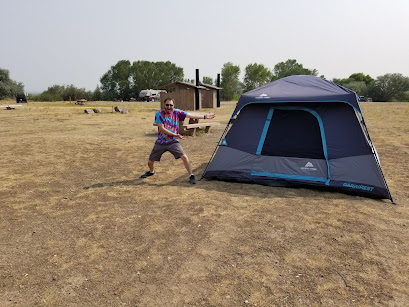 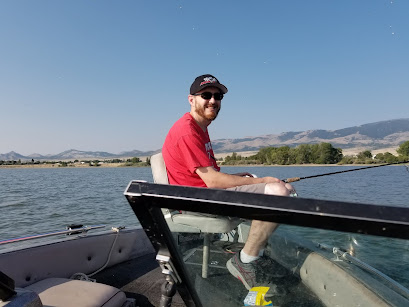 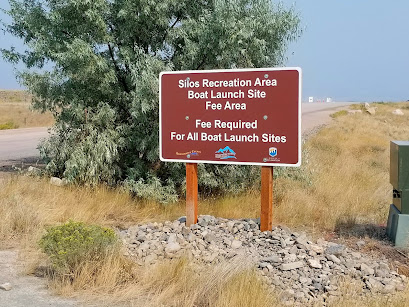 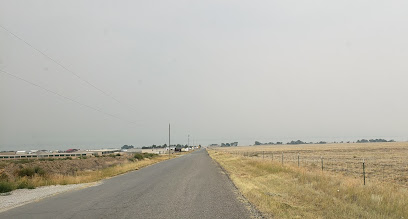