Pretty in Pink, and Blue, and Green, and Yellow, and Orange

A beautiful pink and blue sunset. 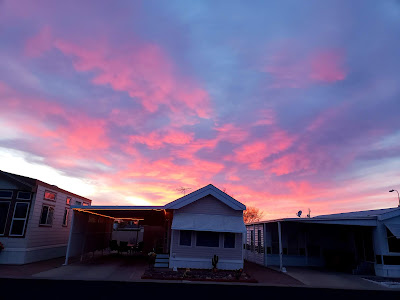 I am so exhausted and it's really hard to blog when your brain is just mush. But I really need to get caught up on the Jim saga before I forget some of it.

Jim came home on Friday and we had great hopes that with the low fiber diet and the antibiotics he was on the road to recovery. We had a follow up appointment with the pacemaker technician and everything was working correctly. The only problem is we still didn't have a monitor so nobody is checking to see what Jim's heart is doing. We also had another follow up with the GI doctor (Jodi). She mentioned that he was anemic and wanted him to have blood work done again and see her in two weeks to follow up on that. She will also be scheduling another colonoscopy when she feels his colon has healed enough.

At home, Jim was not eating. You know something is wrong if he isn't eating. His breathing was also getting worse. Remember - the pacemaker was supposed to help him breathe better. We kept hoping things would get better but Saturday night about midnight he woke me up because he can't breathe. I was going to drive him to the ER but he couldn't even get to the truck. I called 911 and they showed up about five minutes later. Our trailer was filled up with seven big husky men all working on Jim. Once they got him stabilized, they picked him up in a sling chair and off to the ER once again.

Like I said in my last post, this ER can only stabilize people and then find them a room at a hospital that can help them. Finding a hospital room in this area during snowbird season is a real challenge. It took them almost 15 hours to finally find a room at Banner Baywood. Once again he got transported to another hospital. While in the ER they determined that he had fluid on his lungs, a result of congestive heart failure. The blood tests also showed that his red blood cell count had really improved which is a good thing.

Banner Baywood is actually the hospital that my Aunt Happy built (well her money built) many years ago. They have excellent heart doctors and Jim is definitely right where he needs to be. They put him on a diuretic and that has really helped to remove the fluid from his chest which means that he can breathe better. In fact, I just talked to him and he says he feels better than he has in weeks. He's also up and walking around. Hopefully this time when I bring him home he can stay here.

Time to change the subject. We have had a wet and cold winter. Probably the worst since we've been here. And it lasted for a long time. Usually we have a couple of bad days and then it warms up but not this year. What that means is that our desert is green, green, green. I've taken a couple of pictures but they aren't very good. 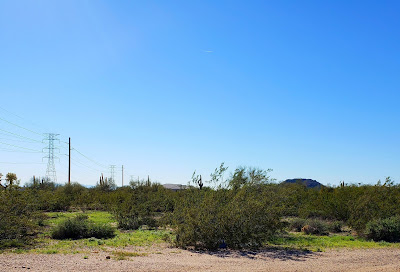 We also have these beautiful yellow flowers blooming just down the road from us. 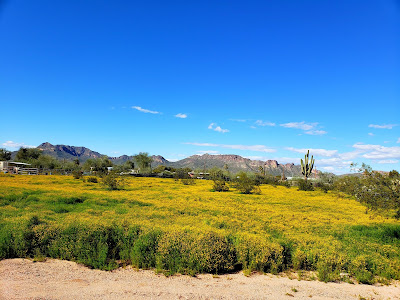 However, this next picture is incredible. Our neighbor Wendy told us where to find these flowers so we stopped so I could take some pictures. I have never seen the desert bloom like it is this year. So overwhelmingly beautiful. No need to touch up this piece of God's work. 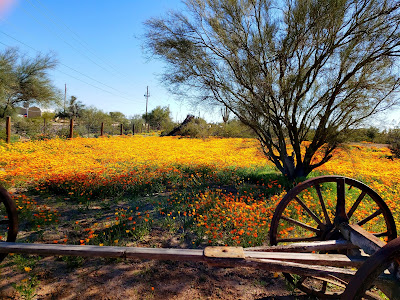 I just talked to Jim and we're not sure when he'll be coming home but hopefully not too long.

This is how the Emergency Room doctor described my husband a week ago. My strong, protective, able to do anything, defender. The man who has always been there for me when I am falling apart. The man who’s eyes light up when I walk into the room.

Fragile – when the doctor said that, I looked at Jim and realized that he was in so much pain and wasn’t able to be the strong one right now and it shook me to my core.

We have been through so much together – two heart bypass surgeries, lung cancer, femoral artery bypasses, a pacemaker as well as my broken ankle and ruptured Achilles tendon. He’s always been strong and never once has anyone ever called him fragile. Age does catch up to us.

He had his pacemaker put in Tuesday morning, Tuesday afternoon he started having terrible stomach cramps. We all thought it was the surgery, the sedation, the pain medication – something like that. So Wednesday I brought him home. He was in terrible pain but it seemed to get to be getting better and on Saturday he felt good enough to walk across the street to visit with friends. But Sunday morning he was in so much pain he couldn’t stand up straight and we headed for the ER here in AJ.

They took some scans, did some blood work and finally decided that he needed a GI doctor. Banner Goldfield is a very small hospital and they do not have any specialists so they transported him to Banner Ironwood. For three days they ran tests, took x-rays, more scans, ekgs, and put him on antibiotics and morphine.

They finally decided that they needed to do a colonoscopy to find out what was going on inside. Thursday the GI doc (Dr. Wang) finally did the colonoscopy but they could only do a partial one. Jim’s colon was severely ulcerated and they were unable to go any further. The inflammation of the colon was probably caused by a lack of blood flow to the colon. They sent a couple of samples off for a biopsy and we should get those results in a few days. The good news is that the colon will heal itself with medications and a low fiber diet. May take a few months but no more pain makes it all worth while.

The colonoscopy was able to relieve a lot of the gas that had built up in his colon and with the antibiotics in his system, he actually started to feel better. Friday I got to bring him home. He’s really weak from laying in bed for five days. And he went almost 10 days with no solid food. We have to work on getting his strength back and figuring out what he can and can’t eat.

We have follow up appointments with the GI doctor, his cardiologist, his primary care doctor, and his electrician for his pacemaker.

I document all of this information so that I have it to refresh my memory. I needed information from his previous medical issues when we were in the ER and being able to access my blog gave me the information I needed.

I have been really busy taking care of Jim and two old dogs and haven't read a lot of blogs lately. I'm hoping next week eases up a bit and I can catch up.

This is the beautiful throw I won in a raffle by Promised Land Dachshund Rescue. 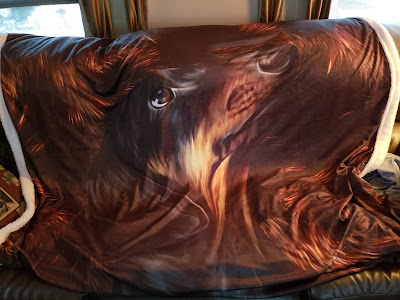 I really wanted to get a picture of both the pups with the throw but Rocky refused to cooperate. Skittlez was more than happy to snuggle with me while we were having our winter weather. 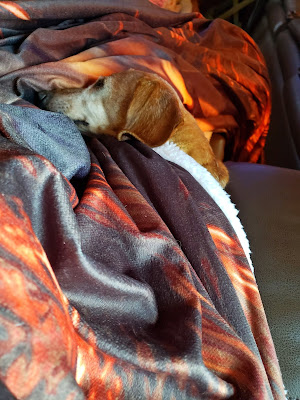 Arizona got a whole bunch of snow - 40 inches up in Flagstaff, 2 feet in Payson. Our Superstition Mountains were covered and Four Peaks were incredibly beautiful covered in snow. I didn't get a chance to get out to take any pictures so google snow in Arizona and you can see some of the beauty. 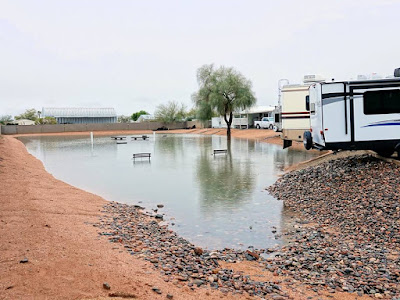 Meanwhile Rocky was making himself comfortable on my pillow. 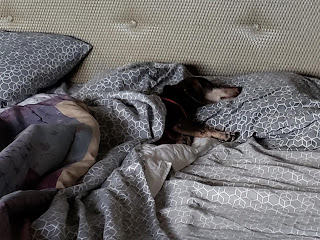 This week the weather is back to normal - high 70's during the day and in the lower 50's at night. Perfect.

I started this last Tuesday so hopefully I can get it finished today and posted.

Jim got his new battery booster (pacemaker) this morning. The surgery took awhile longer than was expected and the doctor explained that he had a great deal of difficulty getting the wire into the left ventricle but was finally successful. 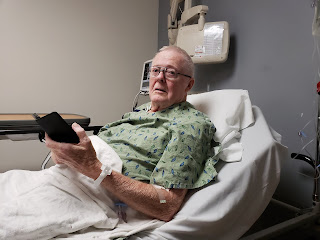 He will be coming home tomorrow and I'm not sure who will be happier - me or Rocky.

I got to bring Jim home on Wednesday. The recovery from the surgery itself is doing great. But Jim has had terrible stomach pains that don't seem to have anything to do with the surgery. At first we figured they were gas cramps caused by the pain medication or his not being able to eat before the surgery. However, those kinds of problems should have been resolved with a day or two and he's still having pain. He also doesn't want to eat anything. That's not good for a diabetic so I'm doing the best I can to get some food in him.

We put in a call to the doctor's office but as per usual we did not get a call back. He also called the hospital follow up number and that was a waste of time. If he's not better by Monday we will be going to Urgent Care.

I'm really hoping that next week sees a big improvement for all of us.