I’m not sure I remember how to blog anymore. As we wave goodbye to everyone who is heading out, that old hitch itch raises it’s ugly head. However, we can’t leave here until the end of May so I spend time looking at places I’d like to check out.

Rod has moved to a rehab center so he can regain his strength before he begins his cancer treatments.

We went to lunch out in Glendale with good friends, Carol and Doug. I’m terrible about taking pictures anymore but we had a great visit with them. They are heading north the middle of April and we may just meet up again this summer.

Easter was a quiet day. We went to Church in the morning, took a nap in the afternoon, and then Jim grilled us a steak for dinner.

Monday we met up with friends for lunch at our new favorite BBQ place – Can’t Stop Smokin’ BBQ. Thank goodness Jeri and Jan took a picture for us. Just look at all that good food. 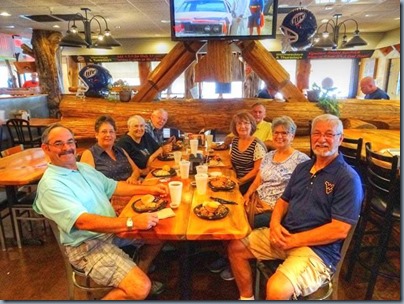 Now for the exciting part of our week. Jim and Marv went fishing last Thursday. Thursday night was the park’s going away party and Marv planned on going. That mean the guys were going to be home around 5:00. Well, 5:00 came and went. And those of you who know me, know that I can panic very easily. My mind immediately starts to think the worse – the boat sank and they drowned, there was a collision on the water or on the road from the lake,  one of them had a heart attack, and on and on. I tried to call Jim but it just went to voice mail. Turns out his phone had died.

I finally found Donna’s (Marv’s wife) phone number and she had gotten through to Marv. The guys were stranded in a cove on the lake with a boat that wouldn’t start. Eventually I got a text from Jim that said they were at the dock and headed home. Marv had finally found the problem – the battery cable had vibrated loose. Sure was glad to see him pull in.

The good news – Jim had a couple of fish to clean. After cleaning them on Friday he took them to our neighbors Bob and Donna who were really excited about having fish for dinner.

For those of you who are already heading north, safe travels.

Rod came through the surgery okay and had an uneventful night last night which is always a good thing. He’s in ICU and the family doesn’t have much news yet. Melissa said today was a better day and that Rod was smiling at his son who was asleep in the chair and snoring.

We had a hot dog roast and bonfire here in the park last Saturday. Had over 60 folks show up and so much good food.

Today after Jim’s doctor’s appointment we met up with my cousin Myrna, and Dianna for lunch. Good to see both of them again.

Skittlez is feeling much better and can even eat dry dog food now. However, those cooked carrots are so much better. Both she and Scooter love their carrots.

I’m surprised at the number of folks that have already headed north. Hope they have safe travels and no snow. 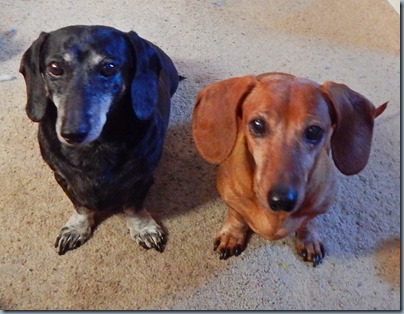 We’ve got a whole lot more gray on our feet and our muzzles but we still like turkey.

I’m sure most of you have seen Rod’s blog post telling us that his surgery is scheduled for Monday. I heard from his DIL and they really don’t know much at this point. They will need to wait for the pathology reports from the surgery as well as what the surgeon will find. Biscuit is being well taken care of and given lots of love.

Our poor Skittlez is not happy with us. She had to have five teeth pulled yesterday and was pretty miserable. She stayed plastered next to me in our chair for several hours and just slept. She could finally have some soft food about 7:00 last night. Boy did she enjoy that. Today she is back to normal. At least normal for her. She still has to eat soft food for about a week until her mouth heals but those canned carrots really went down well. 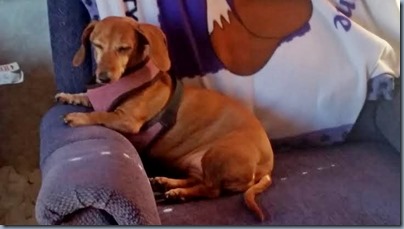 Jim has been working on his boat. The gel coat was coming off so he has been painting and sanding. Sure does look pretty now. Hopefully he can get it wet next week. 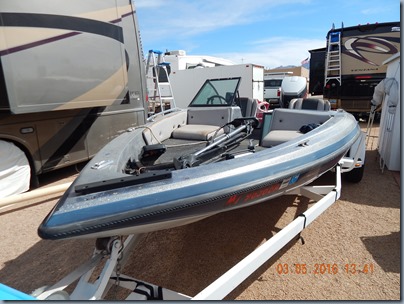 Look who’s back in blog land. Nancy hasn’t blogged in a long time but she has got herself a new trailer and is getting ready to venture out again. Go take a look at her pretty new rig at

Travels with Mr. Nimble and Nancy

Saturday morning we had a patio sale here in the park but nobody came. In prior years there have been lots and lots of shoppers and lookers but not this year. And, of course, this was the year we had put out a few items. Oh well. Back into the shed they go.

We then headed out to Turf Paradise Race Track in northern Phoenix. The Arizona Adopt a Greyhound group was having a big fundraiser. This year their cosponsor was Happy Tails Dachshund Rescue which is the group I support as much as I can.

As strange as it sounds, the Greyhound Rescue group’s biggest event is the doxie races. Don’t know for sure what I was expecting, but I was definitely not expecting the thousands of folks who came out.

The doxie race track is in front of all these folks. 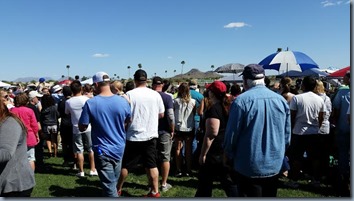 We were in dachshund heaven – surrounded by hundreds of doxies of every shape, size and color. And no – we did not take our girls with us. Skittlez would have been scared and traumatized and Scooter would have tried to be the boss of every other dog there. That would not have been fun for any of us. 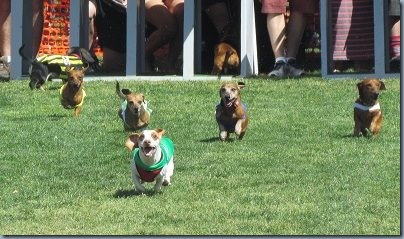 I really didn’t get to see much racing. I’m too short and there were too many people. Jim could see a little bit and he took a couple of videos. I don’t know how to get a video into the blog so if you go to YouTube and search for wiener mania 2016 you can see a couple of videos that are posted there.

They are hysterical. Most of the dogs didn’t make it to the finish line. They came out of the gate and then turned around and wanted to go back. Or they wanted to play with the other doxies that were “racing”. Or there were all kinds of good smells on the grass to check out.

I sure hope they made lots of money for the dogs and that all of the doxies that Happy Tails brought with them all found wonderful furever homes.

Sunday night we went to Sweet Tomatoes with Paula. Love their salads and the brownie bites, of course.

Been really quiet around our house this last week. I don’t have any news about Rod. He has an appointment with the neurosurgeon this week so hopefully we’ll hear more about that.

We haven’t even been out to eat with anybody. I’m going to try and rectify that issue next week.

Scooter is doing really good. Most of the time she is bouncing around and loves to chase rabbits. But occasionally she has a quiet, lay around day. 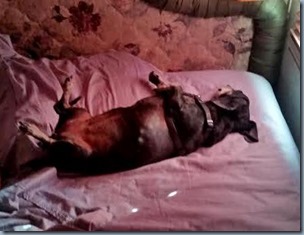 In the above picture the sun was shining through our burgundy blinds and made everything pink.

She loves to have the window down and hang her head out of the truck. 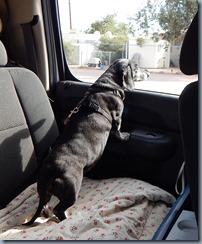 Jim and Marv went fishing. Jim caught a nice size bass but let it go because one fish really isn’t enough for a fish fry.

He took this picture out on the lake. 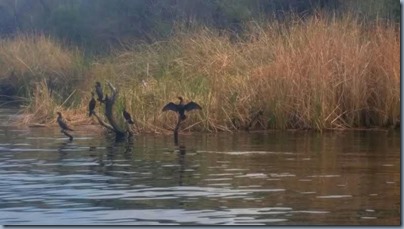 Like I said – not much. Hope all of our friends are safe with the horrible storms that the south and east are having.