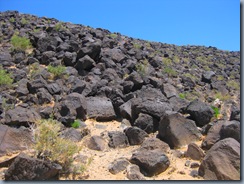 We visited this monument while we were in Albuquerque and wrote up the post when we really didn't have a good internet connection. I thought this had been posted but just discovered it wasn't.

However, it does kind of relate to the Canyon de Chelly posts because the Dine people came through this area at the time of the Long Walk and could have left behind some of these messages. We may never know for sure.

This is one of the largest petroglyph sites in North America. It has designs and symbols carved onto rocks by American Indians and Spanish settlers 400 to 700 years ago. There are more than 20,000 petroglyphs in the monument which is a volcanic landscape. 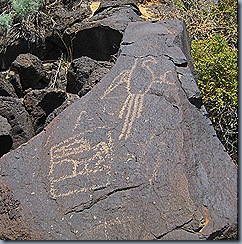 The majority of the petroglyphs were made by the ancestors of modern Pueblo people. They were made by striking a basalt boulder with stones to peck off the desert varnish on the boulder’s surface.

A lot of the images cannot be identified as to what they mean. In some cases they are very sacred to the American Indian tribes and it is not appropriate to reveal meanings. 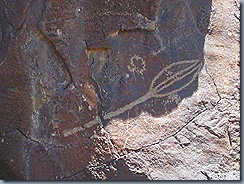 There are three major canyons in the monument that contain petroglyphs. Most of the trails are quite long and rather rocky so we went to Boca Negra Canyon which has an easy trail for us to walk. 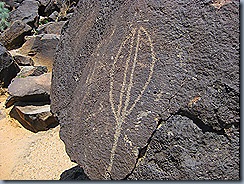 “Each of these rocks is alive, keeper of a message left by the ancestors…There are spirits, guardians; there is medicine…” William F. Weahkee, Pueblo Elder