The very first Blogger Fest was held in 2015 on Plamosa Road in Quartzsite, AZ. We had over 50 bloggers and friends attend. You can read my post about it here: https://wherearethedixonstoday.blogspot.com/2015/01/blogger-fest-2015.html

Jim and I haven't camped in Q for a few years now and I blog so seldom, I had no plans to attend this year. But Paula asked me if I would drive over with her Saturday morning and then come back to AJ that afternoon. I said that would be fun and so Saturday morning off we went.

We got there early enough that we were able to visit with some of Paula's friends camped at La Posa South and grab some lunch at Carl's Jr in town. A word of advice - do not try to order just a plain chicken sandwich there. They don't know how to handle that. All I wanted was a piece of chicken, some lettuce and a bun. No mayo, no cheese, no sauce, no tomatoes nothing. Took two people to take my order and what I ended up with was a whole bunch of lettuce and a piece of BBQ chicken. No bun. Guess I didn't need that bun after all.

Paula and I weren't sure if anybody was actually going to show up at Blogger Fest but Doug (https://missadventuretravels.blogspot.com) had said he would be joining us with Yuma. He also invited friends of his and we ended up with 11 people and three dogs. I really do like having a smaller group because it's so much easier to get to know people. I didn't know most of the people so I asked everybody to introduce themselves. That really helped me to put names and faces and blogs together. Thanks everybody.

I took a couple of pictures which sort of turned out. In this one of Doug and Yuma, I missed most of Yuma. 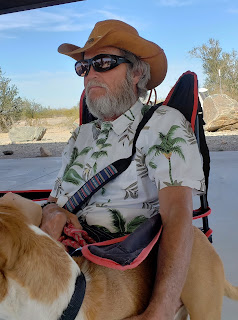 No, John is not asleep. I'm just really lousy at taking pictures. John and Brenda blog at http://johnbrendasincredibleadventure.blogspot.com 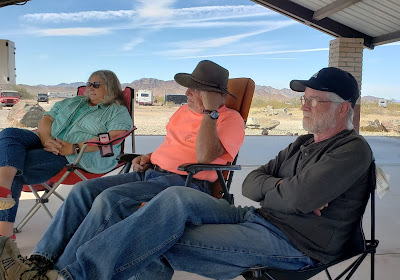 My last picture is of Patsy, Kim, and Tom 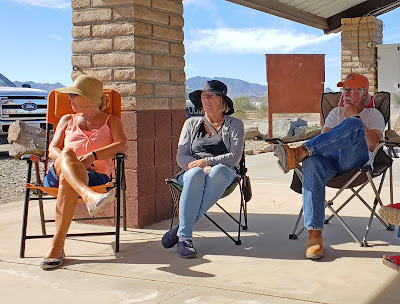 Forgot to get a picture of Paula but you can check her out at http://shadowmoss.blogspot.com/

We reminisced about George and Suzie of our awesome travels at https://geosuzie.blogspot.com and the impact they had on our lives. They are truly missed. Some of us also knew Retired Rod and we got to talking about his Roomba post. One of the funniest posts ever. Check it out here http://retiredrod.blogspot.com/2014/03/roomba.html

I had a good time meeting some new people and I want to thank them all for coming to Blogger Fest. Hopefully we'll see you again next year.

Paula and I headed back to AJ and both of us were pretty exhausted by the time we got home. We'll probably do it again next year.
Posted by Jim and Sandie at 12:23 PM 10 comments: 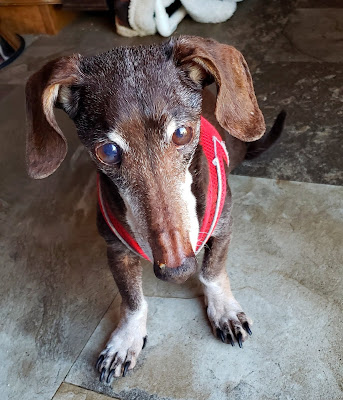 Three years ago today, Jim picked up this aggressive little dog out of his pen at a dachshund adoption event. Since that day he has been velcroed to Jim 24/7.

Rocky was not an easy dog to love (especially for me since he didn't want anything to do with me for almost a year). However, he has somehow managed to worm his way into even my heart. Scooter's death six months earlier had left such a hole in our lives and hearts and Rocky has filled that hole with love and "devotion" (to Jim).

Rocky was aggressive with other dogs but in a pretty short period of time, Skittlez won him over and now he torments her by wanting to sleep in her bed with her. 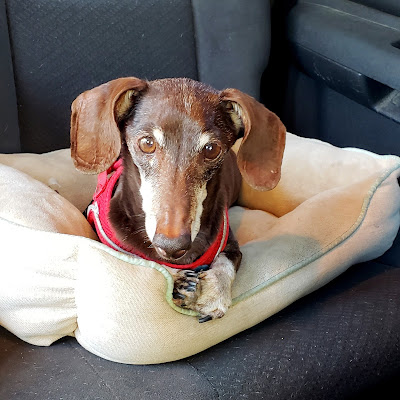 They had told us he might be diabetic because he drank so much water. We found out that he was hungry and was drinking water to fill up his empty stomach. He only had four teeth so he could not eat the kibble they put out for him. We got him started on some good quality canned food and the excessive water drinking stopped. He had a large hole in his mouth which took two surgeries to fix. At that time we had them pull his last four teeth since they weren't doing him any good. He also had a cancerous mass on his side that they were able to remove.

It took him a year before he would let me pick him up without being aggressive towards me. And he did not like other people trying to pet him. However, with time and patience and lots and lots of love, he is now a complete love bug. His kisses are few and far between so when he does dole one out it really is special. 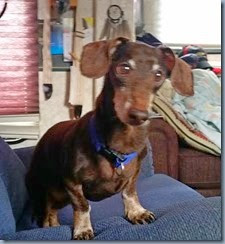 He has serious heart problems and we know that big heart is going to give out on him way too soon for us. He will be sixteen next month and we celebrate every day he is with us.

Don't get me wrong - he's still a difficult dog especially for me. If Jim goes off without him, he whines the entire time he's gone. So the other night when Jim went to the races, he carried on for 5 1/2 hours. Maybe some people (Paula) can tune it out but I can't and it gets really hard at times. He is also one of the pickiest eaters - definitely NOT food motivated. He only weighs 9 1/2 lbs so keeping his weight up becomes a challenge. Because he is on a diuretic, he needs frequent trips outdoors and he can no longer walk up and down stairs, so Jim really gets his exercise carrying him in and out.

We love him and that is all that matters.
Posted by Jim and Sandie at 7:51 PM 14 comments:

Hopefully by now everyone has recovered from all the celebrations for the new year and new decade. Jim and I and the pups celebrated by going to bed. No resolutions made at our house because they wouldn't make it to the second week of January.

We have had some rather cool weather. The snow level dropped and the Four Peaks were covered with snow which made for this absolutely fabulous picture taken by Zach Testa and posted on Fox 10 News. Zac takes incredible pictures and you should check him out on Instagram.  (We can see the Four Peaks from here in the park but I didn't get a picture of them.) 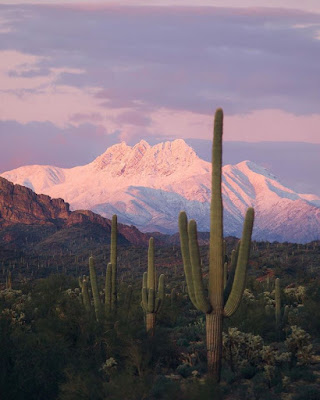 However, I did get this picture of our fabulous sunrise Wednesday morning. No touch up needed.

Saw my doctor yesterday and I am now on a gout preventative pill and a bone builder pill. The older I get the more pills that I have to take. Hopefully I won't see her again for a long time.

We really don't do very much and a lot of that has to do with having old dogs. Rocky had a horrible night last Sunday and I did not think he was going to make it another day. But he rallied a little on Monday after I increased his furosemide which removed a lot of fluid from around his heart. His appetite is still good - picky picky picky though. By Tuesday he was breathing better but Jim and I had some errands to run so Paula agreed to stay with the pups.


Today he is doing as good as a dog with a greatly enlarged heart can do. However, we know his time with us is limited so we are loving him for every minute. Skittlez is still doing really good. Very few problems other than not being able to see or hear. Food is still her great motivator and she always knows when someone is walking into the kitchen. 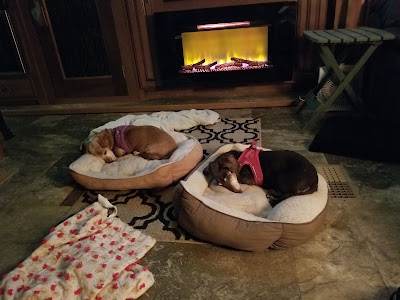 I really do hate blogger. It does strange things when I'm trying to type and so I never know for sure what my post is going to look like. I guess everything is centered now.

Like I said, not much news from here. However, the sun is shining and that makes for a beautiful day.