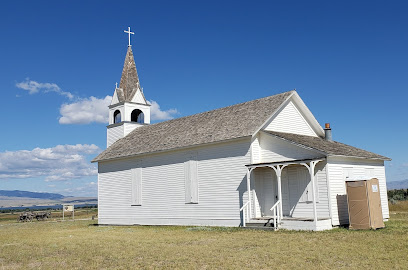 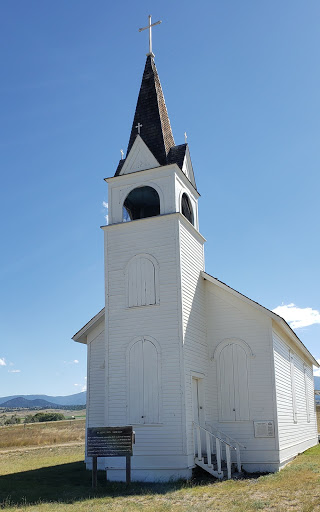 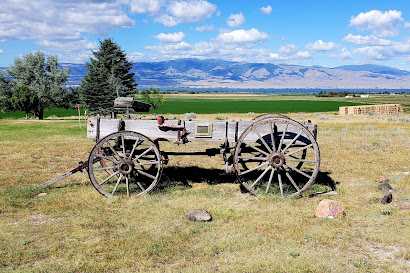 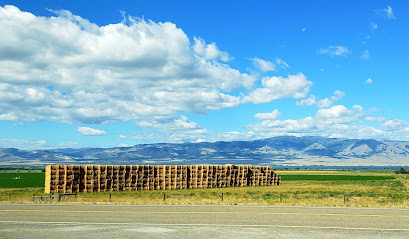 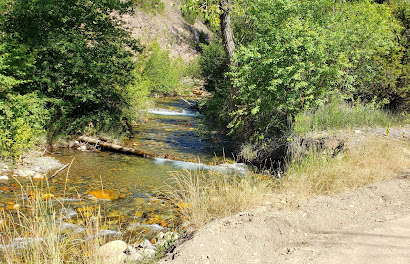 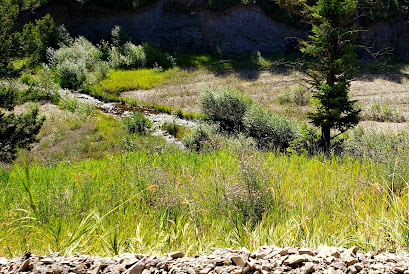 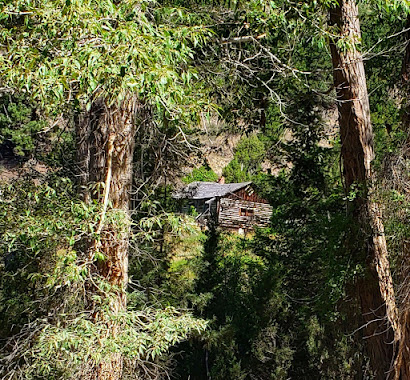 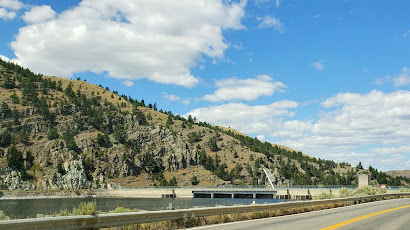 When Jim is not out fishing, we need to find him things to do to keep him out of trouble.

And the most important one of all. Changing out a burnt power connection 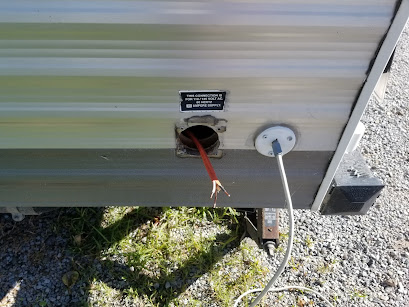 The Lord was watching over us. This could have easily started a fire that would have destroyed the trailer. 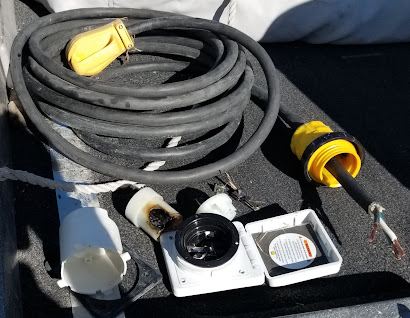 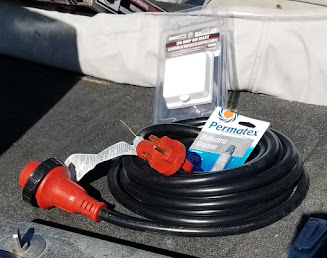 Then right in the middle of fixing dinner, the microwave died.

Trying to fix the old one. Not happening. 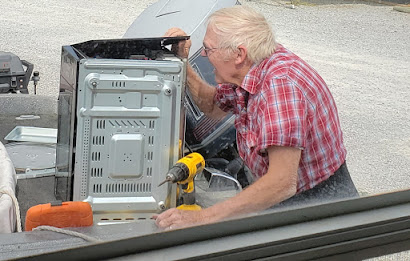 The new one. Of course we couldn't find one that would fit in the space we had, so Jim had to modify the cabinet to make the new microwave fit.

In his spare time, I drag him off looking for ghost towns. 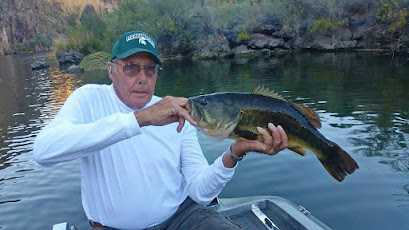 We got the sad news today that Jim's best fishing buddy, Marv Hall, died today. We met Marv and Donna at our RV park in Apache Junction and when Marv saw that Jim had a boat, his eyes lit up. Marv did not know a stranger. It would take a couple of hours for him and Donna to walk around our park because Marv would visit with everybody.
You are going to be missed.
Posted by Jim and Sandie at 7:12 PM 7 comments: 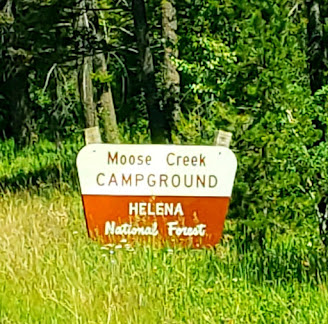 The campground has 9 campsites for tents, trailers and RVs (26 feet maximum - some of the sites can only handle a 15 foot maximum.). Each campsite has a table, fire ring and grate. The campground has drinking water and vault toilets.   There are also bears in the area, but no food storage lockers so keep your food out of site and in approved bear containers. 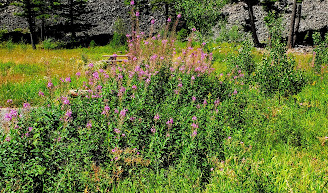 The road in or out is one lane. Not sure what happens if you meet up with another rig. Somebody had better be able to back exceptionally well. The road is also not in great shape. In other words, we would not take our Bungalow into this campground.

Some of the rigs are old and look like they have not been moved for a long time. Then there are others like the two above who are much newer and definitely more than the 15 foot length mentioned. The nightly fee is $15.00 but I'm pretty sure it is not enforced frequently. The surroundings are beautiful and there are lots of hiking trails in the area.

I was really happy to see that our forests have really recovered from the beetle infestation a few years ago. Most of the trees are green and healthy looking. That's how our forests should look.

Dogs of War and Road to Rimini

I love visiting ghost towns and Jim doesn't mind doing the driving so we headed for Rimini, an old silver mining town about 13 miles west of Helena. It wasn't quite what I expected. Rimini has been discovered and lots of folks live there or have taken the old buildings and made them into summer homes. 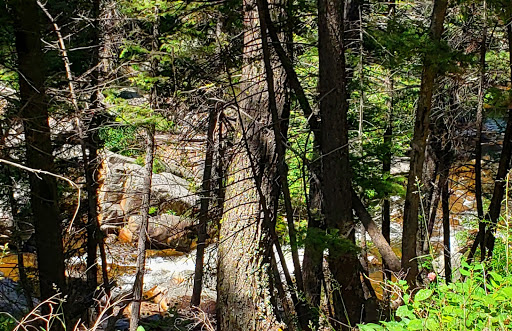 Rimini sits in the Ten Mile Creek Valley between Red Mountain to the east and Lee Mountain to the West.  Silver was found there in 1864 and people looking for riches started arriving. The town and the mining district were named for Francesca da Rimini, a character in the opera Dante’s Inferno, which was popular in Helena at the time. By 1890, Rimini was home to about 300 people and included several hotels and stores; a school; saloons, gambling houses, and pool halls; livery stable; physician’s office; church; several boarding houses; and a sawmill.

However, the boom did not last and with the repeal of the Sherman Silver Purchase Act in 1893 and the resulting low silver prices, many of the miners moved away.  By 1920, the town boasted only 20 residents. 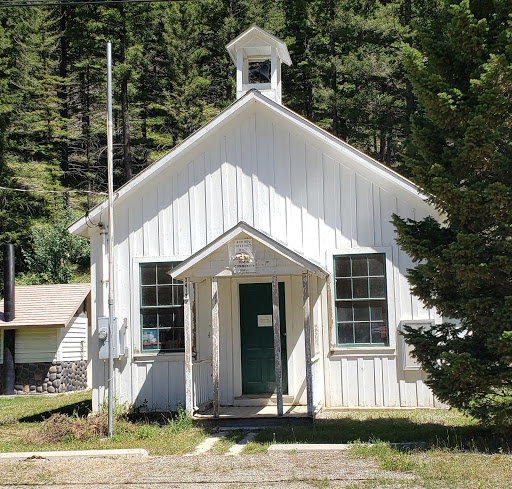 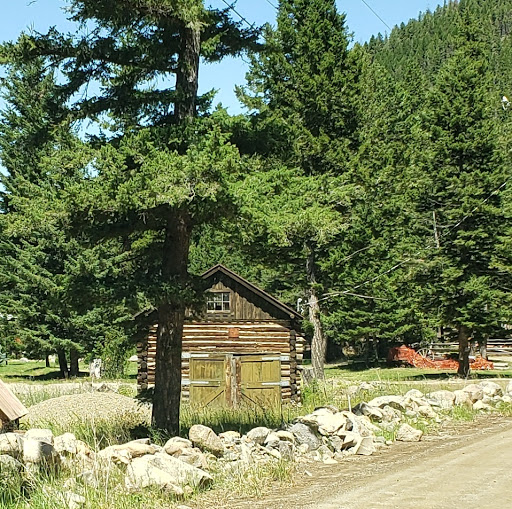 Dogs joined WW II when their owners volunteered them for the army's Dogs for Defense Program. This program set up five War Dog Training Centers in the United States. One of these centers was in Rimini. Rimini was chosen because of the long winters and deep snows. It was the perfect place to train officers and dogs in arctic rescue and survival techniques.

(All of the following pictures are from either the Billings Gazette or Helenair which are both newspapers here in Montana.) 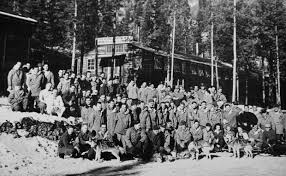 There were approximately 235 people working at the center training around 900 Huskies, Saint Bernards, Newfoundlands, Great Pyrenees and other hardy breeds. The first purpose of their training was to prepare the dogs to accompany the First Special Service Force - the Devil's Brigade - on a top secret mission into the mountains of Nazi-occupied Norway. When the military canceled that mission, the dogs switched jobs. 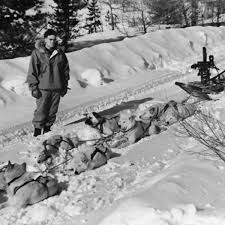 The dogs were then taught to rescue pilots who had crashed in remote regions of Alaska, Canada and Greenland. A few dogs learned to parachute out of airplanes (many got hurt) while others learned to pull sleds and carry packs full of supplies. 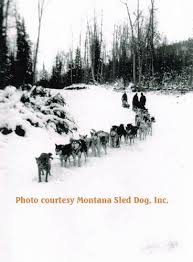 “There was a wonderful sense of satisfaction,” remembered Stuart Mace, one of the dog trainers. “We were privileged to be participating in a process of saving lives rather than taking them. In wartime this is a real privilege.” 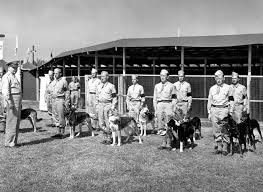 I found an article dated January 31, 2013 in the Independent Record (Helena's newspaper) that has a first hand account from Dave Armstrong. He arrived in Rimini from New England on February 5, 1943 with two others along with 40 dogs.

The soldiers developed sled systems that could carry 1,000 pounds or more of equipment for hundreds of miles. They developed a mount that could support a .30 caliber machine gun on a sled. The Army also developed parachute harnesses for dogs, along with sleds and mushers, could airlift where needed.

In Newfoundland, Armstrong's dogs lugged a sled full of radio equipment to the top of Table Mountain. The radio provided key communications in the war effort, and the dog teams made scores of missions.

Yet - there is very little mention of these heroic dogs and their trainers in any museums. The Montana Military Museum at Fort Harrison in Helena now has a few items to tell the stories of these canine soldiers. (Because of Covid the museum is not open - maybe next year.)

When Camp Rimini closed in 1945, the Army tried to give some away but the old war dogs didn't make good pets. Rescues like we have today who could rehabilitate the dogs were non-existent. So the dogs had to be put down.

There is no marker or memorial in Rimini honoring these wonderful and brave animals and their trainers. Such a sad ending.

If you would like to read more of the history of the Dogs for Defense please check out this site: https://k9history.com/WWII-us-dogs-defense.htm