After the doctor evaluated Jim's neck on Friday, he determined that two more visits were needed and Jim agreed with him. He still has a little trouble turning his neck and has a pain running up into his head. Update: After two more sessions Jim is feeling great and can turn his head.

On Sunday we had a cold front move through. Wind gusts of 55 mph and a little rain. Then the temperatures started to drop. Down into the 40s tonight. But I'll take that over the 100s. Especially when the campground is full with big electric motor homes and fifth wheels running three air conditions and the wattage drops to 106 or 104.

A rather unique towing situation. A Tesla towing a retro rv. 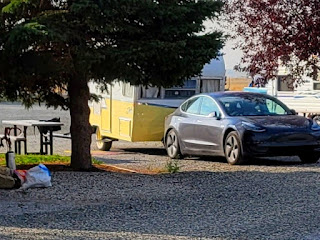 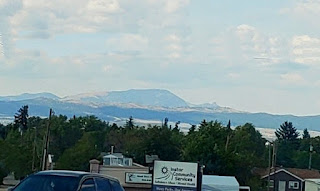 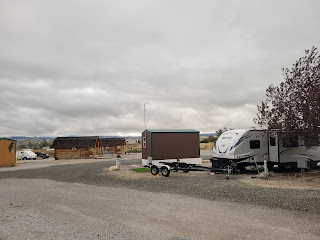 The water in the lake is receding and they keep moving the dock further out. Jim is still able to get the boat in the water but the catching is lousy.  This really has not been the summer we wanted it to be. 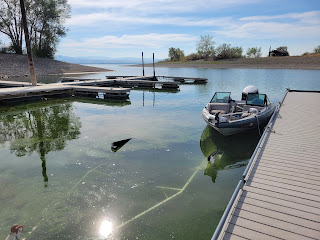 We headed into Helena to run errands and have Jim's final appointment with the chiropractor on Friday afternoon. It was hot outside and we soon realized that the truck was not cooling down at all. Not a good thing. It made for a very hot and windy trip to and from town with windows down.

After the doctor appointment we went to Meineke. The young man working there asked what year our truck was and then looked through the grill. He could see that we were leaking freon and the condenser was shot. They had to order the part and we have an appointment next Thursday to get it repaired. An estimate of $988. There is always something.  (Update: the repair has been done for $10 less than the estimate.)

The last time it rained we had a leak over on my side of the bed. Could not figure out where the water was coming in at. Jim climbed up and took a look. Saw a couple of small holes so when we were in Helena, we stopped at D&D RV and bought some Eternabond. Great stuff.

I do not want him on the roof but I'm not sure this arrangement was much better.

The mask is because the smoke was so bad. This is the water test. No more leak. Which is good because the next day we had several days of rain. Most of it light but a couple of downpours.

Looks like rain to me.  And the rain was more than welcomed. It put a really big dent in our fires and gave the wonderful firefighters a chance to catch their breath. Some of the fires won't be out until it snows but most are under control.

The Sturgis Rally is over.  It's hard to get a clear picture when the smoke is so thick. 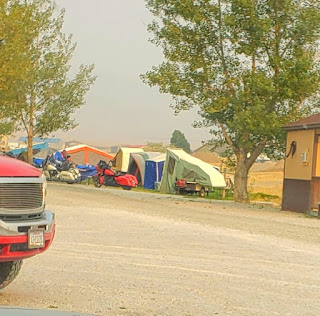 This rig pulled into the campground for a night. We figured maybe it was being transported to it's destination. You don't normally see this kind of trailer on the road. 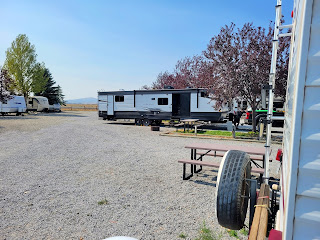 A big rock thrown by a big semi gave us quite a dent. I'm glad it didn't hit the windshield which would have shattered. Hopefully we can get it undented in Billings. 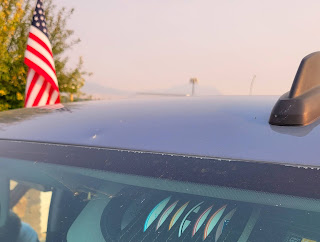 Like the title says - odds and ends of life.

An extremely painful and stressful week.  Needless to say, the shot and pain pills really didn't do any good. Especially since he only got five pain pills. Neither he nor I were getting any sleep and it was so hard to watch him suffer. Finally on Friday, the light dawned. And he made an appointment with his chiropractor on Monday. He has been to Dr. Fife twice before and is really impressed with his knowledge and skills.

After one session the difference is amazing. Jim can turn his head a little and the pain is definitely manageable. He has another appointment on Wednesday and then again on Friday. At that time they can evaluate how well he is doing.  I am a much happier camper and so is Jim.

In other news - a lot of planes at the little airport next to the campground. I decided they had a fly-in for a breakfast get together because shortly after 10 they all started to fly away. 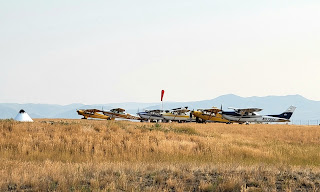 The Wolf Creek fire is just across the lake from us. This picture was taken as we were almost to the campground. It has now burned nearly 15,000 acres and several people have had to evacuate. The next day looking across where the fire is, I can no longer see the lake or the mountains because of the smoke. Just really dreary and sad. 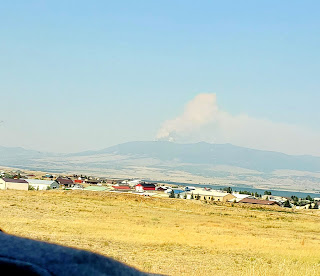 This fire was started by lightning on July 10th. Last night I could see the flames and smoke as the fire came over the mountain and was spreading towards the lake. 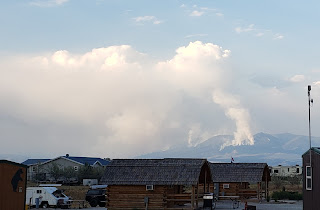 This one was taken at night and we could see the flames. But my camera doesn't take a good picture. That little light was actually red. 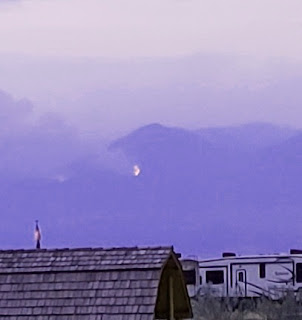 This picture is clouds with smoke drifting through and by them.

Tonight, we've had a little bit of rain and I can't see the mountains but I'm sure hoping this rain has helped the fire fighters.

There should be mountains in front of us as we head out of the campground. 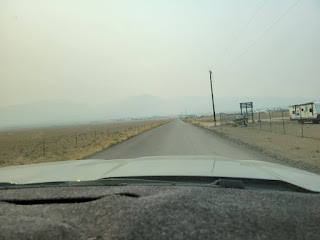 We receive quite a bit of mail especially packages from Amazon and our pharmacy. Because we have been here so many times, they have given Jim his own mailbox up in the mail room. This just cracked me up. 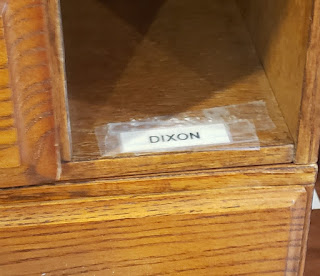 And yes our reservations are made for next year. We decided we like this site better than our original one because it is much quieter with less road noise. So if you're up this way next July or August, come see us.