Isolation in Arizona - Not Too Bad

My dear friend and neighbor, Ginny, informed me that it had been a long time since I had posted a new blog. So here goes.

Let's talk about the weather. It's messed up everywhere. On Thursday, November 5, Phoenix had their hottest ever November temperature - 99 degrees. Today, November 9, our high is supposed to be 57. It snowed up in northern Arizona last night but thankfully we don't see any of that down here in the valley.

Montana has snow and cold weather. Sorry you guys. Earthquakes in the East, hurricanes in the Southeast, fires still burning in California. Hope everyone is staying safe.

Then of course there is Covid that is still running rampart in our world. Jim and I are continuing to isolate which we have done since March. We don't even visit with friends here in the park unless we can safely socially distance outside.  We have not been inside a restaurant but we do enjoy take out occasionally. Almost all of our grocery shopping is done on line and pick up at the store. The majority of the people here in our park do not wear masks but Jim and I wear ours. And we really appreciate those who care about us enough to wear theirs around us. I do not want to see any anti-mask comments. You have your own opinion and I have mine. Let's respect each other.

Our election is over, maybe. President Trump has not conceded defeat. President-elect Biden has hit the ground running so we will see what happens in the next year. My prayer is that we can once again be a united country instead of filled with so much hatred and vitriol. Your opinion is important and so is mine even if they are different. We are all children of God and it sure would be nice to be a family unit again.

Our only excitement is going to doctor's appointments.  I've actually been able to go to a couple of Jim's appointments with him. We've also both had tele-med appointments which worked really good for us. The results of all the tests and appointments are pretty good especially for old people.

Skittlez has also made a few trips to the vet. She is doing good but she is also old. She is on an antibiotic for an inflamed pancreas and has to have another test on Tuesday. She still eats great, drinks lots of water and has a occasional day of bouncing around the house. But most of her time is spent like this. 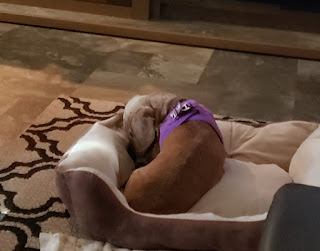 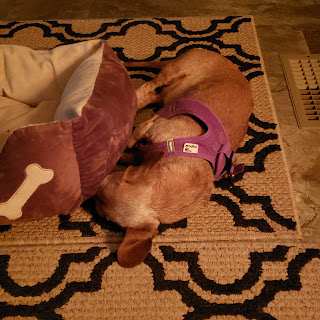 The other day she rolled out of bed and ended up on her back. And yes, we had to help her get right side up. 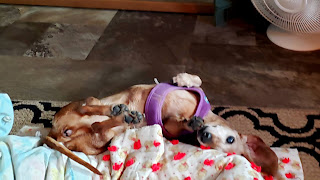 Jim has had a couple of projects to keep him busy. The first one was not fun. We had a water leak somewhere. Took awhile to find it and we had to turn the water off for a couple of days til Jim got the right tool to be able to fix it. Hopefully no more water anywhere except where it belongs.

The next project was more fun even though it also involved water. Paula had this ugly fountain that she didn't want anymore and I told her we'd take it. Jim was really excited - not. First he had to repair a leak. Then we had to figure out what colors we wanted to paint it. I wanted to make sure it was bright and cheerful. 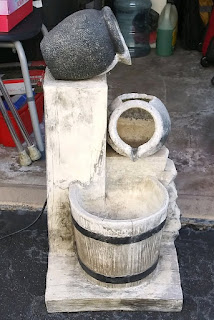 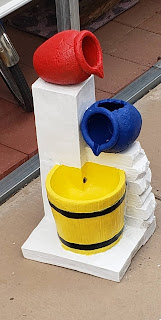 I will leave you with some of the beautiful skies we've had this last month. 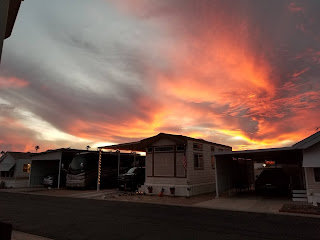 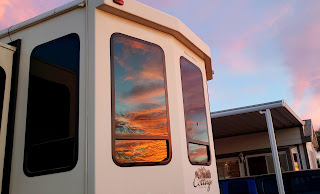 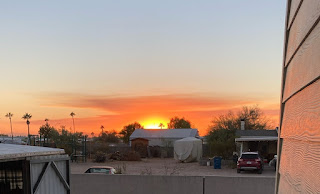 A side note that I found interesting. Normally my blog posts get around 210 or 220 views. My last post on fishing in AZ has 473 views. Guess fishing is really popular.