What can I say about Las Vegas? We've lost money but not a lot. I'm not a big gambler so Jim and I can play for two or three hours on $50 and be very happy. We're currently camped at Sam's Town and would definitey stay here again. The sun is shining and I can't ask for more than that. We were going to leave today but heard on the news that there are 40 mph winds down through the Colorado River plateau which is right where we are headed. So once again flexibility is the name of the game and we'll spend another night. Gives us another chance to put some more stuff away.

The guy parked across the street behind us used to live in Billings, MT and then we found out that he used to own a farm in Savage, MT. I was born and raised in Sidney, MT which is only about 20 miles from Savage. What a small world we live in.
Posted by Jim and Sandie at 10:38 AM 1 comment: 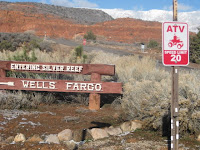 Saw an historical marker for this place and decided to take the time to explore and find out what Silver Reef was all about. It really is amazing to discover all of these exciting places. Notice the ATV speed sign. 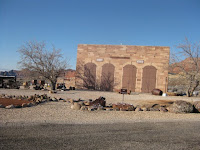 Silver Reef is located about 18 miles northeast of St. George, Utah just off Highway 15. It was once a silver mining boom town. John Kemple discovered silver here in the spring of 1866. He was never able to find the source of the silver vein however. The picture to the right is of the building that was the Wells Fargo Station during the town's boom days.

The news of silver ore being found in the sandstone caught the attention of two bankers, the Walker brothers, from Salt Lake City. They provided the grubstake for a well known prospector, William T. Barbee. Late in 1875 there were 21 claims staked where the potential for mining silver was rich. Barbee quickly set up a town and called it Bonanza City. There wasn't much to Bonanza City, but the property values were high anyway. Most of the miners couldn't afford property there so they set up a tent city in a rocky section of land and named it "Rockpile". It was aptly named because at that time a rock pile with tents is exactly what it was. 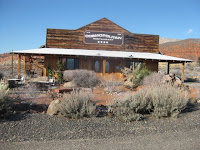 Mines closed in Pioche, Nevada in November of 1875, and many of the miners and business owners came to this area. They changed the name of the "Rockpile" to Silver Reef. Almost instantly, there were 9 grocery stores, 6 saloons, a newspaper, and 5 restaurants. I find it interesting that the grocery stores outnumbered the saloons. There is still a restaurant in Silver Reef, called the Cosmopolitan. You see it pictured to the left. 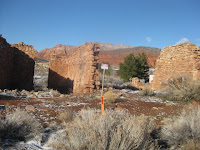 This picture is one of the old ruins still standing in Silver Reef. It's a bit hard to tell exactly what it was, but from it's location, it may have been one of the businessmen's home. From 1878 to 1882, Silver Reef's population reached over 1,500. Six miles were being actively mined, and over a million dollars came from those mines every year. People lived the highlife in Silver Reef until around late 1881 when several factors caused the economy to take a downward slide. It went the way of many of the old boomtowns.
Three things contributed to the demise of Silver Reef. The world silver market dropped, the mines were filling with water faster than it could be pumped, and the mine stockholders lowered wages until the miners couldn't afford to stay. The majority of the mines had completely closed by 1884.
Today, the rich have discovered Silver Reef. Numerous huge homes back in the hills. Stopped at one that was for sale and picked up the flyer - 6,050 square feet, 4 bedroom/4 bath with an 850 sq foot Casita, theatre room and a 4 car garage. It was marked down to $884,900. And what I found so interesting is that there is not a gas station or restaurant until you are almost to St. George.
Wonder what we'll find next to explore. Life is great!
Posted by Jim and Sandie at 10:13 AM No comments: 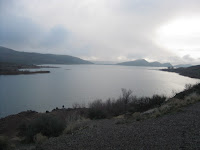 What a gorgeous place. But once again Mother Nature refused to cooperate. Jim had planned on doing some fishing but between the snow, the wind, and the cold - that didn't happen. Now, you must realize that Jim has been living for retirement so he could fish. Disappointment is at an all time high. 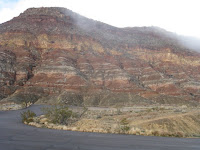 But back to Quail Creek. This Utah state park is three miles east of Interstate 15 on State Route 9. Beautiful campground with 23 RV sites. The best one is Number 7 because it's an easy walk to the restrooms and when you're still can't walk like me that becomes very important. The lake itself offers trout and bass fishing. Jim's idea of heaven. So we will be back!!! (When the weather is nicer.)
Posted by Jim and Sandie at 9:35 AM No comments: 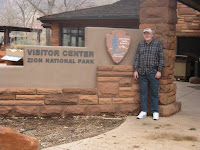 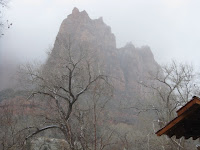 We really did try to see the park but Mother Nature refused to cooperate with us. The snow got so heavy we had to give up and go back. It was almost impossible to see the road let alone any of the park. So this goes back on our redo list. But we did get a couple of pictures. 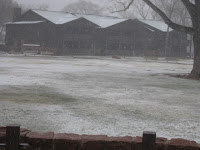 Posted by Jim and Sandie at 9:23 AM No comments: 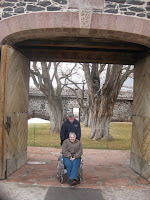 This was an extremely fascinating place to visit. On 12 April 1867 President Brigham Young of the Church of Jesus Christ of Latter-day Saints (Mormons) asked Ira Hickley to build this fort. A fort was built instead of a city because of the scarcity of water and was a way station for pioneers and gold seekers. The fort is built of black volcanic rock and dark limestone with the walls one hundred feet long and eighteen feet high. There was a telegraph office at the fort and daily, two stage coaches stopped there. The fort contains 12 rooms each with a fireplace. The fort was used for over twenty years. 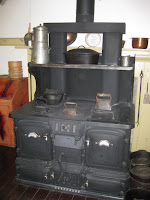 They offer free guided tours. They told us it was really beautiful in the spring but it was cold, windy, and rainy the day we were there. However, the tour was well worth being cold. I highly recommend this stop to anyone. The furnishings in each room are beautiful. And I learned all about the old nursery rhyme - Pop Goes The Weasel. Not what I thought it was about at all. 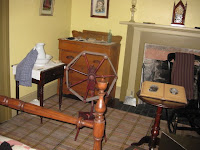 We spent the night in Fillmore and the next morning discovered all this fun stuff. Fillmore is located in central Utah. It is 148 miles south of Salt Lake City and 162 miles north of St. George, and considered the "last frontier" for growth in the state of Utah. The community was named by an act of the Utah Territorial Legislature signed by Brigham Young in 1851, honoring President Millard Fillmore. For a time, Fillmore was the territorial capital of Utah. The original Statehouse building stands today as the oldest existing governmental building in the state and is maintained by the State of Utah as a historic site and museum.
Posted by Jim and Sandie at 11:46 AM No comments: 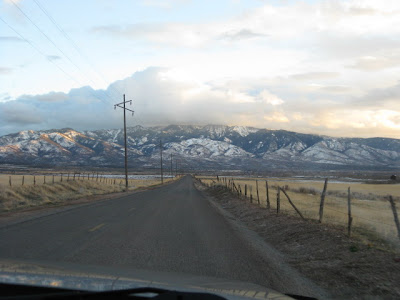 We took a wrong turn trying to find the RV park in Fillmore and this was the view we had coming back towards town. There's still some snow but it's much warmer so that helps. I thought it was beautiful with the clouds sitting on top of it.
Posted by Jim and Sandie at 10:00 PM No comments: 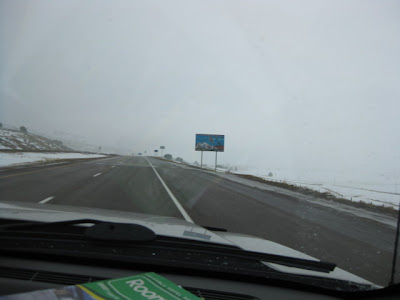 Believe it or not this is the Welcome to Utah sign. I missed the Idaho one completely and might as well as missed this one. Picture taking is one of those many things I need a lot of practice with.

Made it to Kaysville, UT. Stopped at Dave Jensen's RV which contains a Camping World shop. They have free full hook ups so we decided to spend the night and I'm sure glad we did. We had no heat. It was soooo cold - thank goodness for electric blankets. I sure didn't want to get out from under it this morning. But the service guy was a great sport. He didn't make us unhook - he just came out to the fiver and discovered a loose wire under the fridge. HEAT - wonderful heat. So in appreciation Jim just had to buy a converter and a battery filler and pump. It has been raining all night and all day. So Jim got soaked getting us ready for departure. I'm still not able to walk or stand for very long so I'm pretty worthless.

Left Kaysville about 2:00 in the pouring rain. Finally got out of the rain near Fillmore, UT. And then our next adventure awaited us. We ran out of gas - yup - out of gas. But what was so funny is that we were only 1/2 mile from the Fillmore exit. I just cracked up. But Jim was prepared and had a five gallon gas can full of gas. It just seemed fitting that we call it a night here in Fillmore. Staying at the Wagons West RV park. The couple next door are from Idaho and are headed for California.

Wonder what adventures await us tomorrow. I can hardly wait to experience them. This is so much fun.
Posted by Jim and Sandie at 9:33 PM No comments: 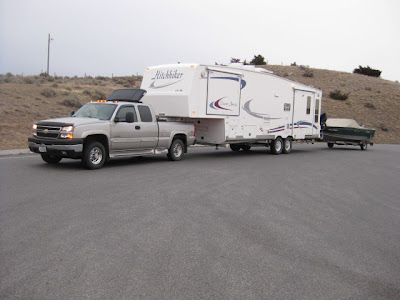 This is our home - all 72 feet of it. WOW -this is so exciting. We finally got out of Billings, MT Thursday afternoon (01-22-09) and made it to Bozeman. Decided since it was so cold and we were so exhausted that we'd just get a motel room for the night. Hopefully that is the last time we ever have to do that. 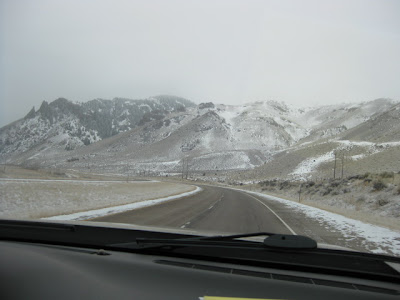 This is a picture I took outside of Dillon, MT before we got to the Idaho border. I'm hoping that is some of the last snow I ever see for a long, long, long time.
Posted by Jim and Sandie at 9:25 PM No comments: 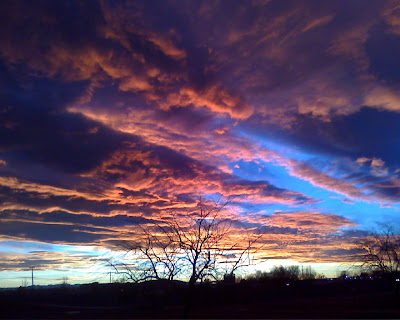 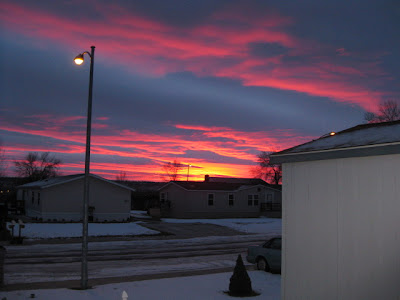 My cast came off yesterday and I've got a "walking" boot now. When we got to the house I made it to the top of the stairs by myself and I felt just like Rocky when he ran up the steps in Philadelphia. I'm ready to conquer the world. After I recover. Those steps really wore me out and I was in a lot of pain. But I'm still ready. Give me another week and hopefully I can do the five steps in less than two hours. Just kidding. 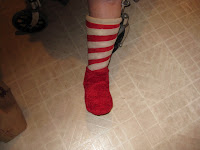 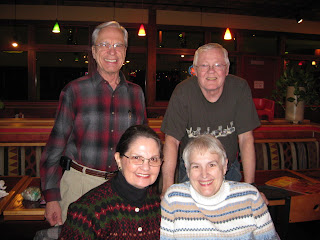 Meet Judy and Gary Beiswanger. Judy found me on the Escapees forum and discovered we were both in Billings, MT. So we met for dinner and 4 1/2 hours later we knew we had met some really special friends. They haven't retired yet but maybe when they see how much fun Jim and I are having they might join us on the road.

Posted by Jim and Sandie at 9:12 PM No comments: 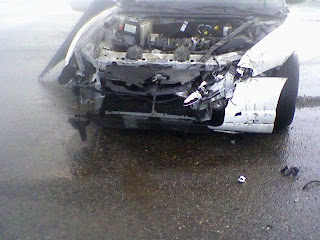 WOW - This is the year I retire, the year I get my cast off, and the year we start RVing full time. This is already a great year. But we ended 2008 in rather a mess as you can see from the picture. A young girl ran a red light and really did a number on our Monte. Jim is fine and neither of the girls in the other car were hurt so we're really grateful about that. Life just keeps happening.