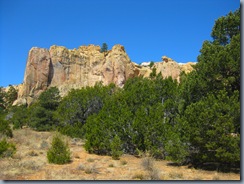 The main feature of El Morro is a sandstone promontory with a pool of water at its base. As a shaded oasis in the western desert, this site has seen many centuries of travelers. The reliable waterhole hidden at the base made it a popular campsite. 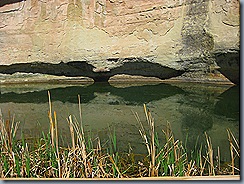 The Spanish explorers called it "El Morro" (The Headland). The Zuni Indians call it "A'ts'ina" (Place of writings on the rock). Anglo-Americans called it "Inscription Rock". 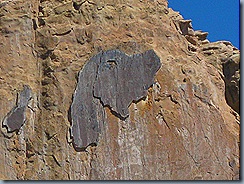 Travelers left signatures, names, dates, and stories of their treks. The inscriptions are fading, but there are still many that can be seen today, some dating to the 17th century. Some petroglyphs and carvings were made by the Anasazi centuries before Europeans started making their mark. There are over 2,000 inscriptions and petroglyphs, as well as Ancestral Puebloan ruins on the top of the bluff. (We did not make the trek to the top of the bluff.) 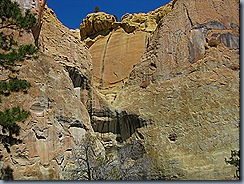 It is estimated that the mesa-top pueblo at El Morro National Monument contained about 875 rooms. However to see it is deceiving—only a small corner of the pueblo was ever excavated. 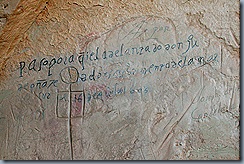 The first inscription carved at El Morro was that of Governor Don Juan de Onate in 1605, 15 years before the pilgrims landed at Plymouth Rock. His inscription reads:

Paso por aq u i el adelantado Don Ju an de Onate del descubrimyento de lar mar del sur a 16 de Abril de 1605. (Governor Don Juan de Onate passed through here, from the discovery of the Sea of the South on the 16th of April, 1605.)

P. (Peachy) Breckinridge was the man in charge of the 25 camels used by Lieutenant Beale in 1857. After his work with Beale, Breckinridge returned to his home state of VA and fought in the Civil War. He was killed during a skirmish in 1863. 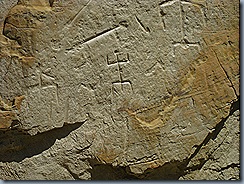 The softness of the sandstone made it easy for travelers to carve pictures, names, dates and messages. That is also the reason that the inscriptions are slowly disappearing. 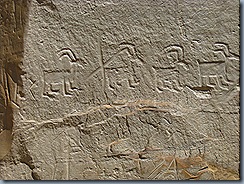 Fascinating to walk where others walked and left their mark many hundreds of years ago. Really glad we stopped here to check it out.