NIGHT OF THE WOLVES 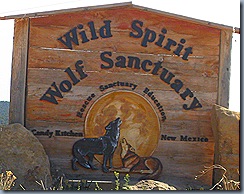 This is our destination.

I read about this wolf sanctuary online and since I do all the navigating, I get to tell Jim where to go. 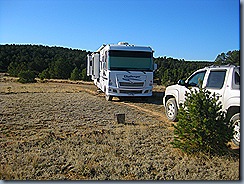 The Sanctuary offers boondocking for $15 a night which I didn’t mind paying because the proceeds go towards helping the wolves. It really is a beautiful place, but hard to find a level spot. They haven’t done much to develop the campground but we eventually got settled and leveled for the night. 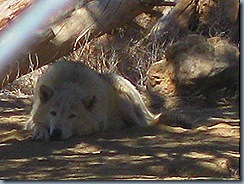 I really hope you will take the time to visit their website and meet the wolves. They have incredible pictures of the wolves, while mine are all taken from outside their fences. 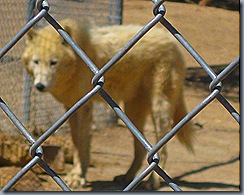 Old-timers tell the story of a New Mexico homesteader who was making a little moonshine on his ranch during the days of prohibition. Making this illegal liquor takes sugar, but the government kept a close eye on folks buying sugar in large amounts. The rancher came up with the clever plan to make and sell pinion nut candy as a front for his moonshine production. Local patrons came to get candy over the counter and "candy" under the counter. Soon, the homestead became known as "The Candy Kitchen" and name stuck. Today, Candy Kitchen, New Mexico is a small mountain community that is home to over 300 residents and 50 wolves and wolf-dogs. 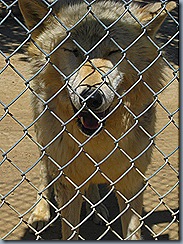 Nearly 60 years after Candy Kitchen was founded, artist Jacque Evans purchased the abandoned ranch to be her home. Jacque had a great love for wolves and wolf-dogs and became aware of the increasing number of unwanted animals and their special needs. She realized her land could become a refuge and opened her life and home to the animals. In 1991, Jacque founded "The Candy Kitchen Wolf and Wolf-dog Rescue Ranch" and supported animal rescues by selling her artwork. News of Jacque's devotion to the animals quickly spread, and soon, the rescue ranch began to expand.

Barbara Berge was rescuing wolf-dogs in Albuquerque and met Jacque through a rescued animal named Sable in June of 1992. Realizing a common dream, Barbara moved to Candy Kitchen in 1993 to help Jacque transform her rescue ranch into a non-profit organization. 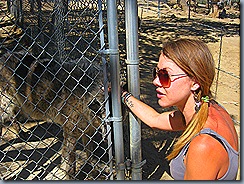 Our guide on the tour was an English young lady. This is her second year volunteering at the Sanctuary. Her visa only allows her to be in the states for six months, so she has to return home for six months and then she comes back to the wolves. Being the only people at the Sanctuary we had a wonderful tour and you could tell how much she loves these animals. 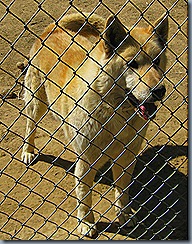 The Sanctuary currently has 54 wolves and wolf-dogs. We learned that once dogs are designated as wolf dogs, they are illegal to own as pets and if one comes into an animal shelter they have to be euthanized. That’s where this sanctuary steps in when they can and saves as many of these animals as possible.

Once the animals comes to the sanctuary, they live here until they die.

I learned so much about wolves and about the stupidity of people who think they can raise these animals as pets. I was also very impressed at how content the animals are. Wolves are very shy animals and many of them would run to the back of the fenced area. The wolf-dogs acted like dogs – tails wagging and ears up. These are really lucky animals. 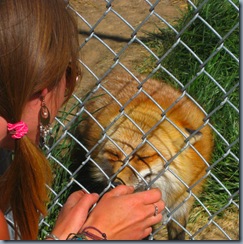 The Sanctuary has one resident that really doesn’t fit. Romeo was found along the side of the road by a lady when he was two months old, after his mother was hit by a car. The lady kept him until she realized that she couldn't handle him anymore. The Fejervary Children's Zoo in Iowa took the red fox when he was 4 1/2 months old. The Zoo had trouble with funding and finally had to close their doors. They called Wild Spirit and Romeo found his new forever home. 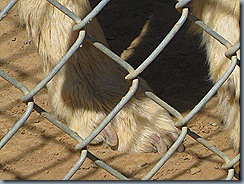 After returning to our rig, we opened the windows to enjoy the gorgeous weather. Suddenly, we were this sound. Incredible – the wolves were talking to each other. The howling was beautiful to hear. We were serenaded all night by the wolves and the coyotes would chime in occasionally from out in the desert. (The howling is not loud. It certainly didn’t keep us awake. Just a beautiful sound in the distance.) What an amazing experience.

If you are ever anywhere near here, I would highly recommend you visit the Sanctuary. The golden eyes of the wolf will captivate you like they did us. 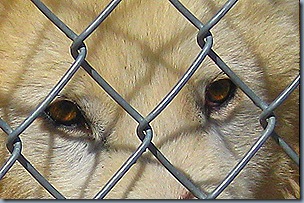