I headed for the hospital about 10:00 and we finally got out of there at 1:00 which isn’t too bad considering all the paperwork that needs to be done. Then it all has to be signed. They sent Jim home with Percocet and that requires a physicians signature. That took forever.

I left the truck with the valet parking which is worth every penny of the $4 for me. Besides those young guys really like driving a big ole pick-up truck.

Jim is feeling pretty good – because he’s got those good drugs. He has been asleep in his chair since we got home. Scooter doesn’t understand why he won’t go rabbit hunting with her and she doesn’t want me to go.

Jim came home with a drain that we have to empty and measure. The surgeon will take it out next week when we go to see him. We’ll also discuss with him about the surgery on the other leg. Jim is really leaning towards leaving here as soon as he heals and then doing the surgery when we get back.

Jim was in the penthouse suite (lol) at the hospital on the 12th floor and this was his view. 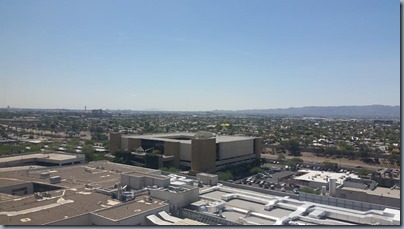 I need to get this all typed up before I forget it.

We left the house at 4:30 this morning and got checked in at 5:25. It didn’t take long for them to take him up to pre-op prep. When he was all hooked up they took me up and we visited with the anesthesiologist , several doctors (interns?) who were learning how to check his pulse in his feet and mark the feet. They also checked out his lump and marked it all up with purple pens. Then the surgeon came in and went over everything one more time. At 7:30 they sent me back down to the waiting area and took him off to la-la land.

At 9:00 the surgeon came out to talk to me. Told me that Jim was doing really good and the lump turned out to be a seroma which is a collection of fluid that builds up under the surface of your skin. They form after a rather extensive extensive procedure where a lot of tissue is removed or disrupted. This happened back in 2012 when he had his femoral artery in his left leg operated on. The surgeon was able to clean it out and he put a drain in it which Jim will have for a week or so.

Then he did the angiogram to check out the right leg. This is where the BUT comes into play. There is a blockage in his groin area and it could not be fixed with a stent. It is going to require another surgery for him to clean it out and put a patch on it. That means that Jim is still going to have trouble walking. This is not an emergency situation so Jim and I will do some talking to figure out what we want to do.

Our options are to go ahead and head north after he heals from this surgery and then have the surgery when we get back, or to stay here and have the surgery. Our main problem is our driver’s licenses have to be renewed in South Dakota and winter is an issue if we get any later into the year.

It took forever to get him into a room so I finally got home at 2:30, ten hours later. Boy were the girls glad to see me. I had put puppy pads all over the floor so they were okay. Early to bed tonight.

Tomorrow can’t come soon enough for either one of us.

In the meantime we’ve tried to find things to keep us from going nuts while we wait. I haven’t been on line for a couple of days so I hope everyone is having a great time.

Jim washed the Bungalow and the truck. (And, of course, it rained last night.) He got a larger plane and has been flying it several mornings. Anything that needs to get done is always done early in the morning before it gets too unbearable.

We’ve watched more movies this last month that we’ve seen in our entire lives. Our library card has been a lifesaver.

We met up with Bob and Jo for lunch at Sal’s Gilbert Pizza. I don’t eat cheese so I don’t eat pizza but I have to admit their pizzas look really good and very interesting. Jo had a ziti pizza and Bob had a spaghetti and meatball pizza. Definitely not your typical pizza. (I didn’t take any pictures so check out Bob's blog.) Jim had a Stromboli that was really good but I had one of the best sandwiches I’ve ever eaten.

It was like taking a walk down memory lane. Back in the 1990’s we lived in Kalispell, MT where the county fair was held. There was a food vendor at the fair who sold Italian sausage sandwiches that were fantastic. The sandwich I had at Sal’s was just like that. It had sausage, green and red peppers and onions with Marinara sauce. It was sooo good. Can you tell we’ll be going back there again?

Had to follow up this lunch with an ice cream treat. We ended up at Udder Delights. I don’t eat ice cream (it’s a dairy thing) but everybody else said it was really good.

We also went out to dinner with two other couples from here in the park. Al and Wilma and George and Melva. We went for Chinese food and followed that up with a visit to McDonald’s for hot fudge sundaes and ice cream cones. Being here all summer does have its perks.

One of the really great things about this time of year in Arizona is that you don’t have the crowds. We don’t need to make reservations anywhere and there are no lines.

Now I’m going to rant just a little bit – We have had four hiker deaths in the last 8 days here in the valley. All four deaths have been related to the heat and lack of water. There was a grandfather who had medical problems which the heat exacerbated and his 12 year old grandson who tried to walk back for help and died of heat stroke. A 29 year old woman was hiking Picacho Peak with her fiancée in 105 degree weather in the afternoon. The other was a women who was hiking one of the peaks surrounding the valley and when she got to the top didn’t feel very good. So she sent her husband and son back down the mountain without her. It took rescuers several hours to find her body.

So what is wrong with people. If you insist on hiking in these extreme temperatures, at least make sure you have plenty of water with you, know your limitations and hike in the cooler temps in the morning. These deaths are so needless; if only some common sense was used.

Enough of my rant. I just feel bad for their families.

I’ll post a quick update tomorrow after Jim gets settled in his room. They are going to keep him overnight.

Just a quick post to let you know that Jim’s surgery has been scheduled for July 20 at 7:30 a.m. He’ll be at Banner Good Sam hospital. No idea where that is so we will take a run out there so we can find it. 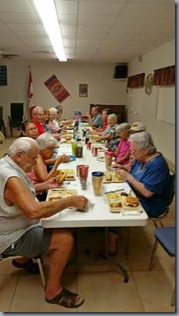 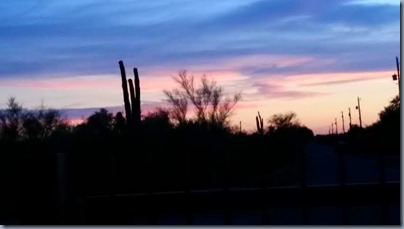