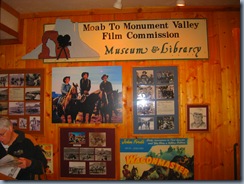 Many many movies, advertisements, and fashion shots have taken place in the Moab area. Considering how beautiful it is, that shouldn’t be too surprising.

In the late 40s the legendary John Ford discovered the rugged beauty of Moab’s Canyonlands and filmed the 1st of many movies here. The first major motion pictures filmed in the Moab area were set on the Red Cliffs Ranch. Wagon Master, Rio Grande, Son of Chochise, Warlock, Commancheros, Cheyenne Autumn, and many more used the ranch and it’s magnificent scenery for filming. John Wayne, Maureen O’Hara, Ben Johnson, Rock Hudson, Henry Fonda, Anthony Quinn, Lee Marvin, Richard Widmark, James Stewart, and Richard Boone have all worked on location at the Red Cliffs Ranch. Other movies include Geronimo, City Slickers, Thelma and Louise,  and over 100 commercials have all used the Moab area as a location. 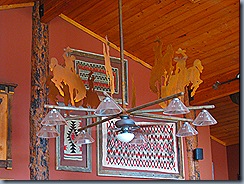 If you take a drive up Rte 128 through a beautiful sandstone canyon, along the Colorado River for about 17 miles, there is a small museum located in the Red Cliffs Ranch Lodge. This museum is dedicated to preserving the filming history of the area. 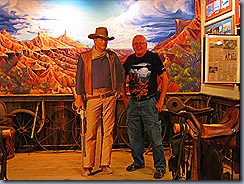 John Wayne filmed several movies in this area. Here’s Jim doing his best Duke impression. What more can I say. 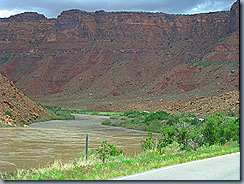 Once again, the scenery was breathtaking. The Colorado River was very full and very muddy. 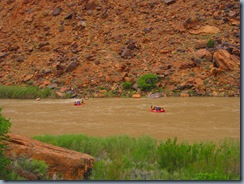 I’m not sure I would have wanted to raft it. If you fell in, you would definitely get a mouth full of mud. Besides that, it was way too cold in my opinion. But that’s just me. 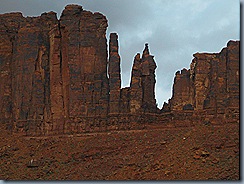 It kept trying to rain on us and the sky was overcast and gray. So the colors don’t really show up all that well. But take my word for it, it was beautiful along this drive. 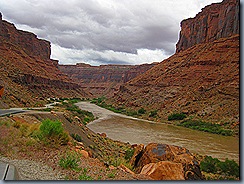 Lots of people joined us on our drive and the boondocking campgrounds along the river seemed to be full. I did see a couple of tent sites that were still open.

If you are in this area, I would highly recommend this drive through the canyon. You could continue on the road and go through the La Sal Mountains and circle back to Moab; but since the weather just was not cooperating, we didn’t make the complete loop.