When we reached this site, the visitor’s center was closed and only open on week-ends during the winter months. But being able to see where George Washington crossed the river and learn the history behind this move made me appreciate even more what these heroes did in their fight for freedom.

It was a desperate act at a time when his country needed it most. George Washington’s crossing of the Delaware River in the dead of the night on Christmas and his subsequent victories in New Jersey energized a tired and sad Colonial Army and gave the American people cause for celebration. It was a desperate gamble, and it worked.

The British forces had occupied Boston and New York, forcing American evacuations of those two important cities. Frankly, the British were coming dangerously close to eliminating resistance in the north. The Declaration of Independence didn't make them any happier, either. 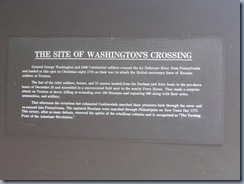 As the year 1776 drew to a close, the American army looked for a way to restore its people's faith in the cause. Against what surely was hundreds of years of military advice, George Washington took a big chance.

It was Christmas, and the Hessians on the other side of the Delaware River, in New Jersey, were sure to be drunk and tired. (The Hessians, German soldiers fighting for Britain, were known for their drinking and their partying, especially on major holidays like Christmas.)

By waiting until nightfall, Washington was able to achieve maximum surprise. But he had to get across the river first. 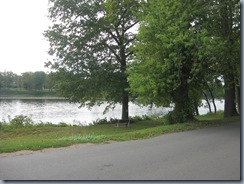 It was cold that night, ice cold in fact. The boats carrying the American soldiers barely made it across because of ice in the river. But make it they did, their commanding officer proudly leading the way, all 2,000 of them. They made it to shore, regrouped, and marched toward Trenton, where the Hessians were camped.

Chaos followed, but it was chaos on one side only. The Colonial forces routed the Hessians, sending them running from cover. The whole affair lasted only 45 minutes, and Colonial soldiers took 900 Hessians prisoner. The tired, hungry Americans also found food, supplies, and especially ammunition.

Building on their success, the Americans marched onward, toward Princeton, where they defeated the British a few days later. These two victories drove the British out of New Jersey and gave the American army and the American people a tremendous sense of achievement. Victories had been hard to come by lately, and the victories in New Jersey, emphasizing the daring of George Washington as they did, gave the people new hope that their cause was right and new determination that they could win their independence at last. 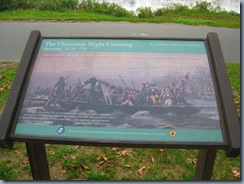 The crossing of the Delaware and the victories at Trenton and Princeton were certainly not the end of the Revolutionary War. But they did give both army and populace a reason to keep fighting and a story to tell for later battles and later generations.