Cole Porter was born June 9, 1891, at Peru, Indiana, the son of pharmacist Samuel Fenwick Porter and Kate Cole. Cole was raised on a 750-acre fruit ranch. His mother introduced him to the violin and the piano. By age ten, he had begun to compose songs, and his first song was entitled "Song of the Birds".

On December 18, 1919, he married Linda Lee Thomas, honeymooning in the south of France. This was a "professional" marriage, as Cole was gay. In 1923 they moved to Venice, Italy,

In 1934, his hit "Anything Goes" appeared on Broadway. During the show's hectic rehearsal Porter asked the stage doorman what he thought the show should be called. The doorman responded that nothing seemed to go right, with so many things being taken out and then put back in, that "Anything Goes" might be a good title. Porter liked it, and kept it.

On October 24, 1937 visiting as a guest at a countess' home in New York, he was badly injured in a fall while horseback-riding. Both of his legs were smashed and he suffered a nerve injury. He was hospitalized for two years, confined to a wheelchair for five years and endured over 30 operations to save his legs over the next 20 years.

On August 3, 1952, his beloved mother died of a cerebral hemorrhage. His wife, Linda, died of cancer on May 20, 1954. On April 3, 1958, he underwent his 33rd operation, and still suffering from chronic pain, his right leg was amputated. He refused to wear an artificial limb and lived as a virtual recluse in his apartment at the Waldorf-Astoria in New York City. He sought refuge in alcohol, sleep, self-pity and sank into despair. 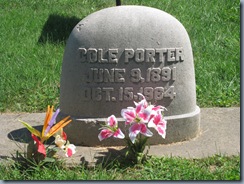 After what appeared to be a successful kidney stone operation at St. John's hospital in Santa Monica, California, he died very unexpectedly on October 15, 1964. His funeral instructions were that he have no funeral or memorial service and he was buried adjacent to his mother and wife in Peru, Indiana.