Kirtland is a small settlement in northern Ohio where members of the Church of Jesus Christ of Latter-day Saints gathered shortly after the Church was founded. Between 1831 and 1838 Joseph Smith and early members of the Church established Church headquarters here, built a temple, and laid a foundation of strength for the future.

The Lord told Joseph to leave immediately for Ohio so he could escape his enemies and because he was needed in Kirtland. But Joseph was worried that the trip from New York to Ohio in winter would be hard on Emma. They had moved seven times in the four years they had been married, and Emma was expecting another baby. Joseph used a sleigh to make the trip easier for Emma. They left for Ohio at the end of January, and it took several days to travel the three hundred miles to Kirtland. 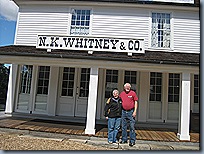 When the sleigh reached the Gilbert and Whitney store in Kirtland, Ohio, Joseph jumped off and went into the store. He extended his hand to a man he had never met before and said, “Newel K. Whitney! Thou art the man!” Newel Whitney was very surprised, for he did not know the Prophet. “You have the advantage of me,” he said. “I could not call you by name as you have me.” The Prophet answered, “I am Joseph the Prophet. You’ve prayed me here, now what do you want of me?” 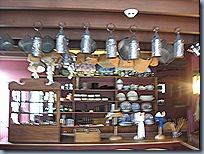 Newel Whitney and his family had heard the gospel preached by the missionaries and had joined the Church. They prayed to receive the word of the Lord. While in New York, the Prophet had seen in a vision the Whitneys praying for him to come to Kirtland. Joseph and Emma lived in the Whitney home for several weeks.

An interesting note about the shoes in the store. They were not made for either left or right feet. They were made to be worn on either foot so if one side started to wear out in one spot, they could wear it on the other foot and the shoes would last longer,