The original John Johnson Inn was built in 1813 by Peter French and was the first brick structure in the Kirtland area. The inn was purchased by The Church of Jesus Christ of Latter-day Saints in 1833.

The Inn served as a temporary printing office after the destruction of the press in Independence, Missouri by a mob in 1833. The Morning and Evening Star was published here between December 1833 and 1834. 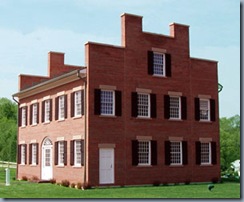 Other events occurring at the inn included displaying the Egyptian mummies Joseph purchased from Michael Chandler, the calling of Joseph Smith, Sr. as the first patriarch of the Church, and the giving of the first patriarchal blessings.