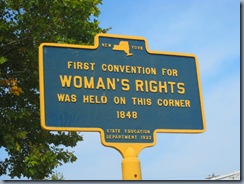 The First Women’s Rights Convention held on July 19 and 20, 1848 in Seneca Falls, NY, marked the formal beginning of the women's rights movement. At the time of the convention, women were not allowed the freedoms assigned to men in the eyes of the law, the church, or the government. Women did not vote, hold elective office, attend college, or earn a living. If married, they could not make legal contracts, divorce an abusive husband, or gain custody of their children. 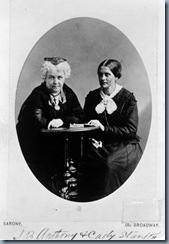 After 2 days of discussion and debate, 68 women and 32 men signed a Declaration of Sentiments, which outlined grievances and set the agenda for the women's rights movement. A set of 12 resolutions is adopted calling for equal treatment of women and men under the law and voting rights for women. 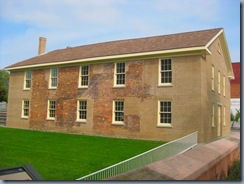 The Wesleyan Chapel is sometimes called the “Great Lighthouse” because it hosted the First Women’s Rights Convention and other reform gatherings in the 1800’s.

I am so glad we had time to visit this National Historic Park. I’m sure that if I had lived in those days, I would have been one of the signers of this document. I am grateful that these women had the courage and fortitude to stand up for themselves and all of us who have followed them in this land.