After being picked up at the campground, the tour shuttle added a few more passengers at a couple of the hotels in town and then headed up the Niagara Falls Gorge to Whirlpool State Park. 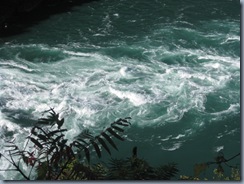 The park is located along the upper Whirlpool Rapids, a dangerously turbulent stretch of the Niagara River downstream from Niagara Falls. The gorge walls pinch the river, forcing massive amounts of water through a smaller space and creating dangerous Class V whitewater. The Niagara Whirlpool, with its 125 ft deep swirling waters is the result of the dramatic turn in the Niagara River's flow (nearly 90 degrees), as the river changes to follow an ancient debris-filled valley . As the Niagara River formed, it 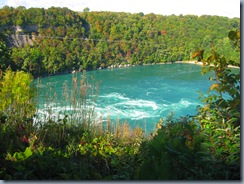 crossed with this valley and abruptly turned to fill and follow it, cutting away the soft dirt and stone filling. The collision point at which the Niagara met the old valley became the Whirlpool, and the jutting out of the pool is due to the erosion on the ancient river bed in the other direction.