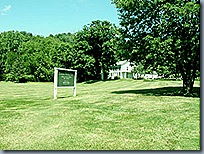 While living at the Isaac Morley farm a few months after their arrival at Kirtland, Emma gave birth to twins, but the babies lived only a few hours. Emma and Joseph’s first baby had died in Pennsylvania, so none of their first three children had lived very long. The day after the twins were born, Julia Murdock also gave birth to twins, a boy and a girl. When Sister Murdock died, her husband John allowed Joseph and Emma to adopt his twin babies.

Isaac Morley joined the Church in Kirtland in November 1830, one of the first converts of the area. He was later called to serve as a counselor to the presiding bishop, Edward Partridge in 1831. His farm served as the principle gathering place of the Saints in Kirtland.

It was while on this farm that Joseph made the prophecy that the Church would fill the whole earth. Wilford Woodruff described the event as follows:

"When we got together the Prophet called upon the Elders of Israel with him to bear testimony of this work.When they got through the Prophet said, 'Brethren I have been very much edified and instructed in your testimonies here tonight, but I want to say to you before the Lord, that you know no more concerning the destinies of this Church and kingdom than a babe upon its mother's lap. You don't comprehend it.' I was rather surprised. He said 'it is only a little handful of Priesthood you see here tonight, but this Church will fill North and South America it will fill the world.'"