They had lots of door prizes to give away. The merchants in this area were very generous and I think almost everybody won something.

Mac the Fire Guy gave away a refrigerator fire suppressant system which I really wanted. They didn’t call my number but they did call Jan’s number and she wanted it as bad as I did so that turned out well.

The last night of door prizes, we won a pocket camcorder. I haven’t quite figured out how to use it yet – it seems to be more complicated than our Canon. But now I have a camera to use. Jim carries the other camera in a case on his belt loop and many times he’s not near by when I want a picture of something. 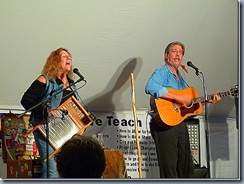 One night we had a musical duo for entertainment. Nick’s blog has some great pictures of them. They were pretty good especially since they just come in and volunteer to perform for whatever the crowd will throw in the hat. We were pretty generous. Raised over $600. They are now headed to Escapade to perform. 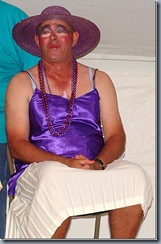 You definitely have to read Nick’s blog to see the Hoosier’s Honey contest. I’m going to post one picture but to see all the “ladies” you really have to visit his blog.

There is also a you tube video for your enjoyment. http://www.youtube.com/watch?v=kIuLgUDa8R4