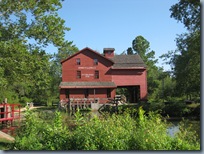 While our home was being worked on we had to figure out how to entertain ourselves for 8 hours every day. That's really hard to do when it's so hot and humid and you have two dogs with you. We couldn't leave them for long in the truck and they aren't welcome at a lot of places.

One of the days (there were four of them) we took the cd tour of the area that the Chamber of Commerce offers for free at the visitor's center. The tour took us almost all day so it worked out really well for us and the girls.

This was one of our stops on the tour. Bonneyville Mill is the oldest continually operating grist mill in Indiana. It has produced quality flour for over 150 years.

During the mid 1830’s Edward Bonney had a vision of a rapidly growing city centered around a sawmill and a grist mill on the Little Elkhart River. When the railroads by-passed the Bonneyville site and the proposed cancel system along the St. Joseph River was never developed, Bonney’s dream ended. He sold the mill and went into the tavern business. He was later accused of counterfeiting, forcing him to flee the area as an outlaw. 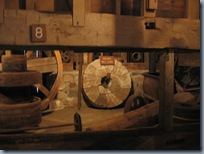 The new owners of the Bonneyville Mill decided not to replace their grist stones with a roller mill used to grind flour. They never expanded, choosing to remain a “progressive” mill of the Civil War era, committed to serving the local farms and merchants.