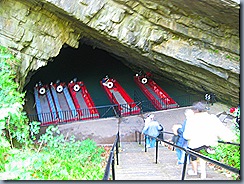 Centre Hall, PA - This was a wonderful tour. It’s not very long but extremely interesting and beautiful. The only bad thing about it is the very steep path down to the boats and the 40+ steps.

The Seneca Indians discovered this natural landmark in the Valley of Karoondinha (Penn’s Valley). In 1885, Penn's Cave was opened as a commercial show cavern. 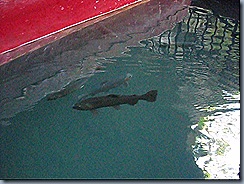 Penn's Cave was named after John Penn, the nephew of William Penn, who founded the colony of Pennsylvania. The tour is rather unique, as it is made completely by boat. Penn’s cave is American’s only all-water cavern.

The most famous story 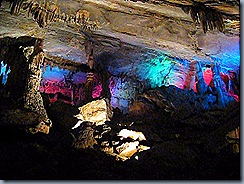 told about the cave, though fictional, is the legend of the Indian maiden Nita-nee.

Malachi Boyer, a young Frenchmen from Lancaster County, explored the wilderness. Once in April, he camped at Mammoth Spring, close to the Indian camp of Chief O-Ko-Cho, on the shores of Spring Creek near Bellefonte. He saw Nita-nee, the beautiful daughter of O-Ko-Cho, washing a deerskin in the stream. They immediately fell in love with each other. The Indians would not permit their marriage, so they decided to run away. But they were captured by the seven brothers of Nita-nee and returned to Chief O-Ko-Cho. 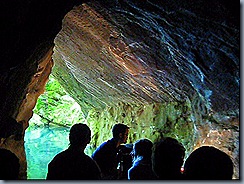 O-Ko-Cho told his sons to thrust Malachi into a nearby cavern, filled with water (Penn's Cave). They guarded the entrance, so he tried to find another entrance. After swimming around in the water for a week he died because of exhaustion. As he did not want the Indians to see him die, he crawled into one of the furthermost recesses of the cavern. They later found him and weighted the body with stones before they dropped it in the deepest water in the cavern.

Today, on still summer nights, a sound like "Nita-nee - Nita-nee" rings through the cavern.