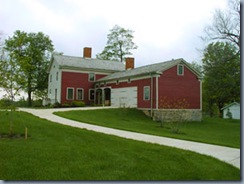 The John Johnson Farm served as headquarters for The Church of Jesus Christ of Latter-day Saints for approximately six months between September 1831 and March 1832. Also, in an upper room of the house, several significant revelations were received including Doctrine and Covenants Section 76, the vision of the three degrees of glory.

The Prophet Joseph continued his work of the translation of the bible while living here, and the John Johnson Farm was where the Prophet and Sidney Rigdon were dragged from the house and tarred and feathered on March 24, 1832.1 Five days later, Joseph and Emma's adopted son, Joseph Murdock, died due to complications resulting from exposure.