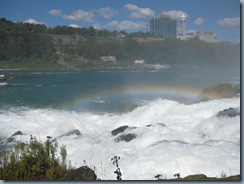 While there is no actual cave anymore, the original cave was a natural cave behind Bridal Veil Falls 130 feet high, 100 feet wide and 30 feet deep. It was discovered in 1834, and originally dubbed Aeolus' Cave, after the Greek god of winds. Guided tours began officially in 1841, and continued until a rock fall in 1920 made it clear the passage was no longer safe. The cave was obliterated in a massive 1954 rock fall and subsequent dynamiting of a dangerous overhang.

The tour officially reopened in 1924, allowing visitors to get close to the front of the Bridal Veil instead of behind it. Tropical storm-like conditions can be experienced, as winds can reach up to 68 mph underneath the falls. 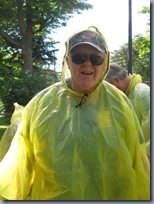 You ride an elevator down 175 feet into Niagara Gorge. Then clad in a bright yellow poncho and wearing special footwear provided (no, we didn’t keep them because they were really uncomfortable), you climb up a series of wooden walkways to the famous “Hurricane Deck”. As you stand at the railing, you are only 20 feet from the torrents of Bridal Veil Falls. 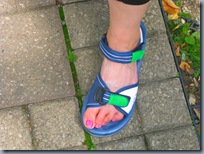 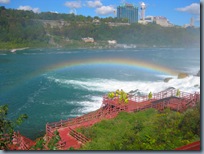 But let me tell you, you do get drenched if you go up to the Hurricane Deck. Several of our group decided not to go for it but the three of us plunged upwards. And it was so worth it. What an amazing experience.

We loved the sign up on the Hurrican Deck.