WAY TOO MUCH EXCITEMENT!! 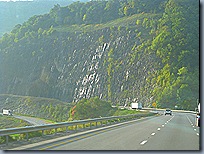 We left beautiful Bald Eagle State Park and headed east by 8:00 a.m. I wanted to get to Quakertown, PA early enough that we would have time to do a lot of sight seeing. 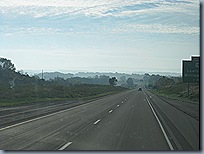 Traffic was pretty heavy – lots of trucks but when we got to the 234 mile marker, it almost came to a complete halt. About four miles back there were signs about an accident ahead. That was definitely a true statement. 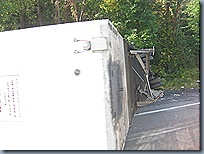 Traffic was down to one lane because this truck had shattered about a mile of guardrail and ended up on it’s side. I’m pretty sure the driver was okay – probably fell asleep.

According to state police, the tractor-trailer flipped on its side around 1 a.m. Wednesday. Troopers said the truck's load of plastic pellets had to be unloaded before the truck could be moved. 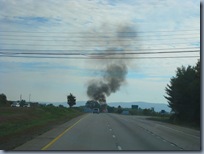 We finally made our way past this mess and about twenty miles down the road there was a van on fire. It had just happened because the fire department hadn’t arrived yet. There was one patrol car on the scene. 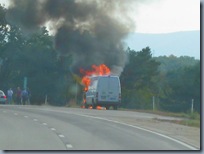 A truck driver ahead of us made the statement that fire extinguishers wouldn’t be any good because it was too far gone. Another true statement.

I’m pretty sure the guys in the van were standing with the officer (you can barely see them in the picture) and it appears they are okay which is a good thing. 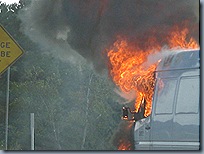 I could do without this kind of excitement when we’re traveling but I’m glad that nobody was hurt.