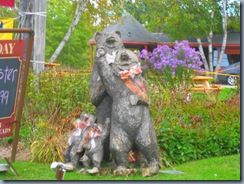 I drug Jim out on another Roadside America hunt. The first stop was the bear family located in front of a restaurant in Rutland. They are looking a little worse for wear. And they weren’t dressed up. Somebody needs to spend a little time and care on them. 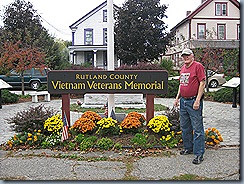 Also in Rutland is a rather strange Vietnam Veterans Memorial. The story behind this frozen GI is: John Reno, a Vietnam Veteran, had struggled with depression and recurring flashbacks following his service. The sculpture was begun in 1981 as a means for John to work through his anger and pain. But when he died suddenly in a boating accident in 1982, his artistic vision of a soldier lay neglected for years in a Castleton, VT gravel pit. 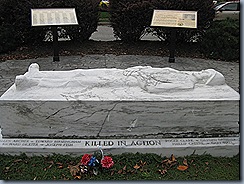 Finally in 1995, a fellow Vietnam-era veteran, John Bergeron, went looking for it. A sculptor from West Rutland, Don Ramey, took on the task of completing the sculpture as a tribute to veterans, applying his own creativity and skills to John’s basic concept. 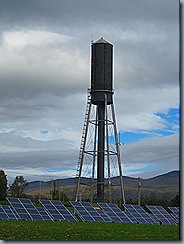 Then there is the Water Tower Space Ship, also in Rutland.

We tried to find a rubber boot bridge but we couldn’t find it so I’m not sure if it’s gone or we just couldn’t see it.