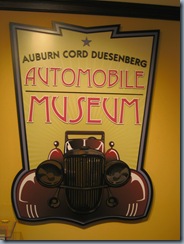 While our new shades were being installed we had an entire day to entertain ourselves. We had seen this museum advertised as we drove up the interstate into Elkhart and decided this would be a great stop.

The museum is actually in Auburn, IN which is about 75 miles southeast of Elkhart. I had never seen a Cord or a Duesenberg. These cars are absolutely spectacular. I would have to say this is probably one of the very best car museums we have visited. Their collection is amazing.

MSNBC News named the Auburn Cord Duesenberg Automobile Museum one of the “Top Ten Gearhead Destinations in the United States.” This automotive mecca exhibits over 120 cars ranging from 1894 to 1999. 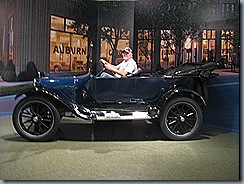 Jim took lots of pictures so I made him pick the ones that he really wanted on the blog. Can you see the drool running down his chin? 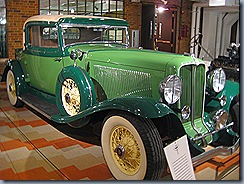 1932 Auburn (Michaela would really like this one. It’s green.) 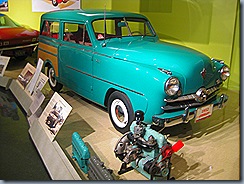 This was definitely a great place to stop and we spent a couple of hours wandering around looking at these beautiful cars.