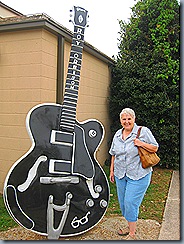 Studio B was built by Dan Maddox in 1957 at the request of Chet Atkins. The plans for the studio were drawn up on a napkin and took four months to build. The actual studio itself measures 42.5' by 27' by 13'. In 1960 and 61 an addition was added with office space and rooms for tape mastering and a lacquer mastering lab. 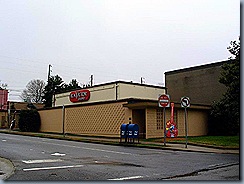 The studio became famous in the 1960s for being a part of what many refer to as the Nashville Sound. Think Eddy Arnold. A sophisticated style characterized by background vocals and strings, the Nashville Sound both revived the popularity of country music and helped establish Nashville as an international recording center. 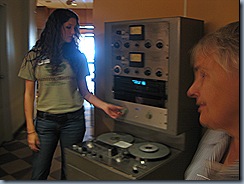 Studio B stayed in active use until 1977. In its heyday, Studio B saw the creation of numerous chartbusters, such as Dolly Parton's "I Will Always Love You," Elvis Presley's "Are You Lonesome Tonight?" and Charley Pride's "Kiss an Angel Good Morning." Imagine being in the same room where these artist’s actually recorded these songs that I know so well. Wow! 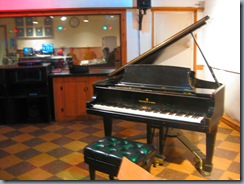 This is the actual piano that was used by Elvis – can’t you just imagine him sitting there, with the Jordanaires standing around the piano at 2:00 a.m.

In her 1994 memoir, My Life And Other Unfinished Business, Dolly Parton recounted how she was rushing to her first recording session at Studio B in September 1967 (shortly after having signed with RCA) and, in her haste to make the session on time, drove her car through the side wall of the building. She noted how the spot where her car impacted the building is still visible.