CAN YOU FIND THE ONE THAT DOESN’T BELONG? 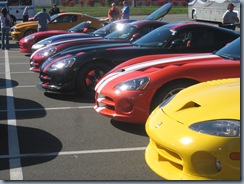 When we stopped at the
Corning Glass Museum, these Vipers pulled in at the same time. They had a club traveling together, however, one of them may belong to their club but isn’t driving a Viper. (Hint – it’s the dark gold one at the top of the picture.) 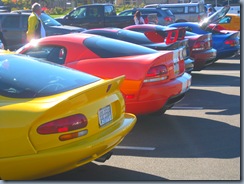 That’s a Mustang hidden in the picture. Jim asked the guy how he got in with this group and the guy told him that he was just sneaking in to show them all what a good car looks like. We had a great laugh over that one since Jim is not a Ford fan but will admit he does like the older Mustang.