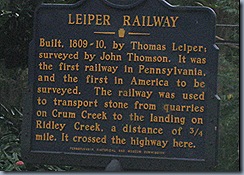 The Leiper Railroad was a horse drawn railroad that operated between 1810 and 1828 in what is now Nether Providence Township, PA -- it was replaced by a canal, remnants of which are still visible. It was the first documented rail road in America.

Leiper is credited with constructed the first permanent railway or tramway in America. A pair of iron rails laid on wooden ties ran from his quarries to a landing in Delaware County, PA. It was three quarters of a mile in length. An ox, hitched to a cart filled with stone, walked between the rails slowy pulling the cart from the quarry to to Ridley Creek where the stream became navigable. There the cargo was loaded onto barges for the ten mile trip to Philadelphia.