We took a trolley tour of Nashville and these are a couple of places that we stopped. Mostly it was a driving tour. Very informative. 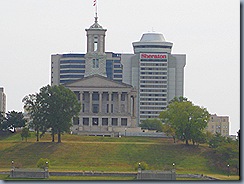 The Tennessee State Capitol, completed in 1859, is located on a high hill in downtown Nashville. During the Union occupation of Nashville (1862-65), the Capitol was transformed into Fortress Andrew Johnson. The artillery located there never had to be fired in battle, but were used for drills and celebrations. 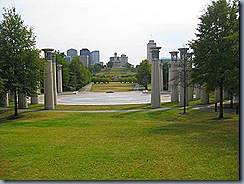 In order to save the one remaining view of the Capitol and to commemorate Tennessee's 200th birthday, the concept of a mall similar to the one in Washington, DC, took shape. This is the view of the capitol building from Bicentennial Park. 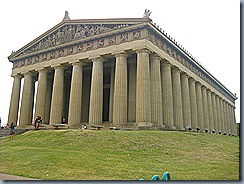 In 1897, this was the site of the Tennessee Centennial and International Exposition and was renamed Centennial Park. After the exposition ended, most of the buildings and exhibits were dismantled, except for a full-scale model of the Parthenon in Athens.