Toni and Doug arrived at the campground about an hour or so after we did and it was wonderful to see them again. 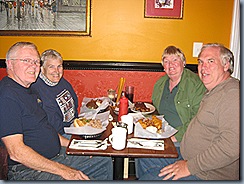 A lot of the restaurants here in Whitehall, NY are closed for the season. So off we went on a quest for a place to have dinner. The GPS recommended a place in Poultney, VT however, that one was also closed when we got there. Jim stopped in a gas station and asked them for a recommendation. 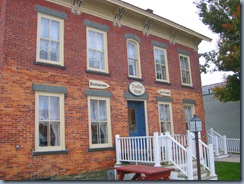 The Trolley Stop seemed to be the place to go. And it was only a short distance down the block.

Found a great little Vermont tourist shop that we just had to visit and sitting outside was this huge pumpkin. 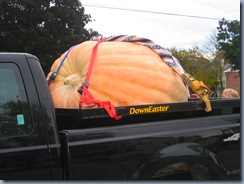 It’s owner (can you own a pumpkin?) told us that he had just been at a contest and took first prize with his 1,254 lb pumpkin. Doug got the low down on how he grew a pumpkin this large and how they move it in and out of the truck and onto scales. Toni, Jim, and i went into the shop and had some pumpkin fudge. It was surprisingly good.

The restaurant was really good. Jim said his roast beef sandwich was the best one he’s ever had. They had their Halloween decorations up 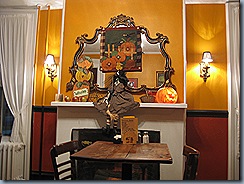 to celebrate the season. A lot of people up here in New England really get into decorating for Halloween. In fact we even saw some Christmas decorations that Doug tried to convince us were Halloween colors – green for the stem on the pumpkin and the red was really orange. Good try Doug.