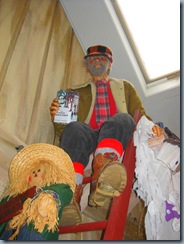 This gentlemen started off our tour of the Maple Museum. It was fascinating to learn how maple syrup is made and to realize that the process has not changed all that much over the years.

The Indians were the first people to boil the maple sap into syrup that sweetened their food for them.

Maple Syrup begins as sap in a maple tree. The sap is harvested in the spring when temperatures rise into the 40s during the day and cool off into the 20s at night.

The sugaring season usually lasts about a month, but it can be extended if the weather is right. 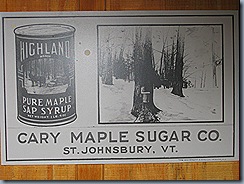 Trees are tapped using a drill to make a small hole. A spike is inserted into the hole and the sap drips out if conditions are right. The sap either drips into a bucket or flows down a special tube to a holding tank. Anywhere from 35-50 gallons of sap, depending on how much maple sugar there is in the sap, are needed to make one gallon of maple syrup.

The sap is collected into a large holding tank and from there is fed into the sugar house. In the sugar house, it is poured into an evaporator (pictured here). Maple sugar evaporators are specially designed to 'boil off' hundreds of gallons of water very quickly and so the sap is concentrated into maple syrup. This is called 'boiling down'. 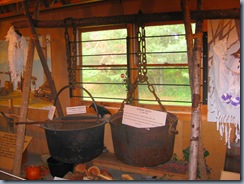 As the water is boiled off and the sugar becomes more concentrated, the sap moves toward the front of the pan. There, the sap becomes syrup and is 'drawn off' into a pail or some other container before it is filtered. Once filtered, the syrup is put in bottles or containers and sealed until someone opens it up to enjoy a sweet treat!

I think the fact that amazed me the most was that there is only one ingredient in Maple Syrup - the maple sap.

We now have some wonderful Fancy Grade Maple Syrup for the next time we make pancakes or waffles or french toast.