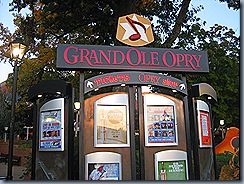 The first thing I did after we got set up was to call the Opry to get tickets for Friday night’s show. They had lots of tickets available and we had really great seats up in the Mezzanine.

But before we go to the Opry we need to see some of the pictures of the flood that hit Nashville last May. 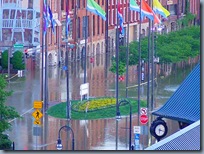 This is where we purchased our tickets for our tour and caught our trolley. 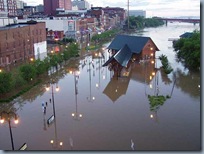 Even the Grand Ole Opry was underwater.

The Cumberland River really devastated this area but they are coming back strong. The Opryland Hotel is still closed but plans to reopen the middle of November. The Mall that is next to the Grand Ole Opry House is still closed and no one is sure if they will be able to reopen. The Bass Pro Shop, one of the mall’s anchor stores, has reopened.

Here are some of the pictures posted on their website showing how deep the water was. Just amazing.

The performances at the Opry are a live radio show which makes for a very interesting and different experience. It’s definitely not like a concert and is very laid back. 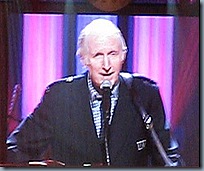 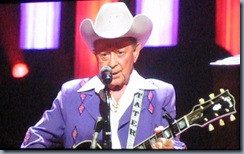 The line up for our performance was: George Hamilton IV; Jimmy Dickens (who is 89 and still going strong). 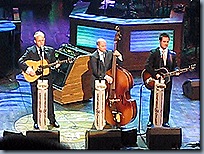 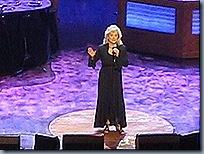 Riders in The Sky 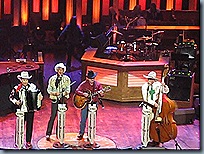 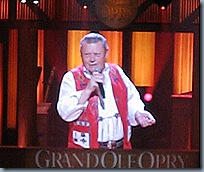 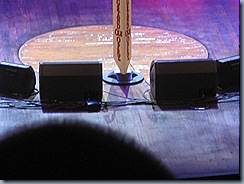 Did you notice the round circle of wood that is a different color on the stage? That piece of wood is from the Ryman Auditorium where the Opry performed for several years before they opened their own stage in 1974. It was on this piece of wood (when it was still at the Ryman) that Patsy Cline performed. Jim got to meet Patsy at a fire fighters hall in VA and it was exciting to know she stood on that piece of wood when she performed.