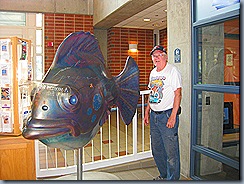 We spent a couple of nights at the casino in Erie waiting for the three day week-end to be over before we got back out on the road. We caught up on a lot of chores and shopping that needed to be done but I wanted to fit in some sight seeing. So we headed for the Erie Maritime Museum.

Well, guess what. It was closed for the long week-end. So we took a picture of Jim with this big fish. Because the museum was closed so was the US Brig Niagara. It is a sailing school ship for anyone who wants to learn to sail the big ship. 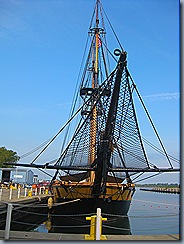 The US Brig Niagara is a wooden-hulled, two masted brig that served as the relief flagship for Oliver Hazard Perry in the Battle of Lake Erie during the War of 1812. 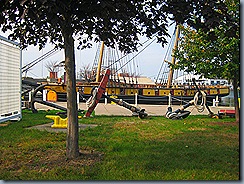 The Niagara was constructed from 1812 to 1813 to protect the American coastline on Lake Erie from the British and played a pivotal role in the battle for the lake. Along with most of the warships that served in the war, the Niagara was sunk for preservation on Presque Isle in 1820. Raised in 1913, it was rebuilt for the centennial of the Battle of Lake Erie.