TRY AND KEEP UP WITH US TODAY 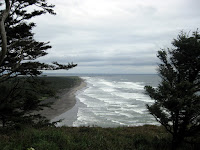 We headed our early with our tour guides taking us towards the ocean. That would be the Pacific Ocean. 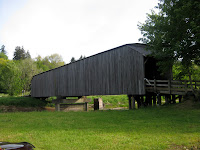 Our first stop was at the wonderful, old Greys River Covered Bridge. 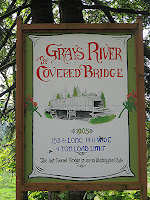 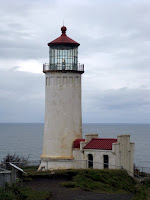 1898 and located at the mouth of the Columbia River. It was erected to guide mariners approaching from the north who could not see the Cape Disappointment Lighthouse.

Onto the Cape Disappointment Lighthouse. In 1788, while searching 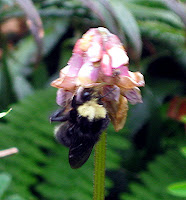 for the Columbia River, English Captain John Meares missed the passage over the river bar and named the nearby headland Cape Disappointment for his failure in finding the river. 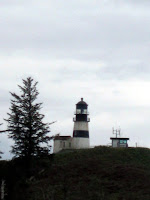 In 1856 the lighthouse was built to warn seamen of the treacherous river bar known as "the graveyard of the Pacific". It is the oldest functioning lighthouse on the West Coast.

By this time we were starved so we stopped at this really great seafood restaurant in Long Beach called Doogers. Terry says 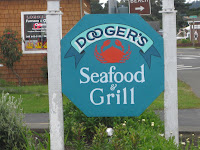 We also visited the longest beach in the world and Jeri did some great donuts for us in the sand. She's having way too much fun with their new Jeep.

We tried to find John and Cheryl's Bluebird while we were out on the coast but didn't have any luck tracking them down. Hopefully next time we're in the same area we can meet up. 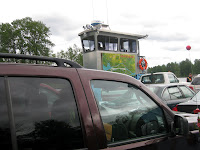 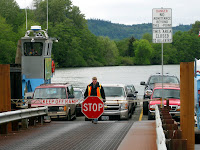 Our return home was via the Columbia River ferry. Now this was really fun. The ferry runs from Westport, OR to Cathlamet, WA. It is a 12 minute ride - you just drive your car 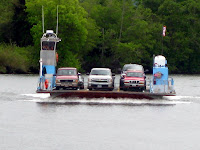 on and off you go. We had a full load on our trip - 9 vehicles. Jeri & Terry have done this several times but this was a new experience for Jim and me and we had a great time.

I don't know about you, but we're tired. Of course, there's always energy for fishing. 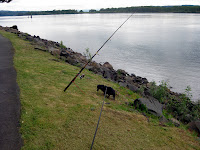