We pulled out of Medford this morning and I actually let Jim drive on the interstate for a few miles. We haven't driven on interstate (except for about 15 miles) since we left Phoenix and it was really rather boring. But it gave his arms a rest from all the mountainous roads we've been on. Then we got to Green, OR and I told him he had to turn left. That put us back on those curving, scenic, narrow roads out to the coast. 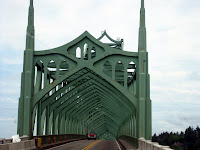 This was the bridge out of Coos Bay and these are the sand dunes that separate the bay from the ocean. 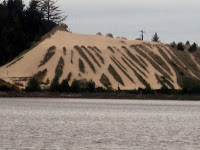 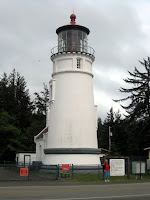 We also stopped at the Umpqua River Lighthouse. This is a great whale watching spot but you have to be here during the right months and we weren't. We were going to stay at the Umpqua Lighthouse State Park (I figured it would be near the lighthouse and we'd be able to see it.) Wrong. The sites in the park were short - we would have fit but we decided to go a little 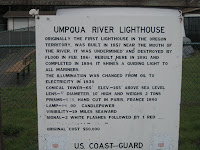 further down the road to a Passport America park. The state park was $24 for hook ups and our rv park is only $12. I would have paid the extra for the lighthouse but no lighthouse - not worth it.

Who knows where we'll end up tomorrow night.
Posted by Jim and Sandie at 8:26 PM