We left Reedsport, OR this morning and headed north along the 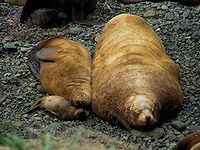 coast. About 20 miles up the road were the Sea Lion Caves. One of our Escapees members, suggested we stop there and I am so glad we did.


These caves are privately owned and an elevator has been built to take you down to the caves. However, there is still a path that goes down to the elevator and that means you have to walk up it to get back to the street. I think I'm in training for my Death Valley mile next year. 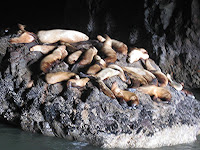 There were probably 150 sea lions in the cave and the volunteer ranger guy told us that was very unusual for this time of year. He told us that by May most of the sea lions have left this are and moved further north for the summer. I figured they knew I was coming and hung around so I could see them.
I really enjoyed watching them - the larger ones were mainly sleeping or nipping at the younger ones as they climbed over the top of them. The younger ones were playing "king of the rock". Jim took some really good video and this is just a small portion. They are noisy. 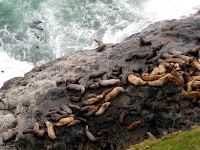 There is also another path that takes you down to an overlook above the rookery where the mama's and the pups hang out until the pups get the hang of the swimming and climbing back on the rocks.
These are called Steller sea lions - named after the naturalist who first described them in 1741.
Posted by Jim and Sandie at 5:26 PM