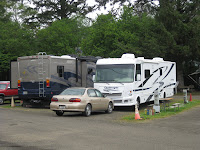 We spent the night in Netarts, OR in a Passport America park. The turn to get into the park was extremely tight but Jim was able to manuever it. Sites were small but since it was only overnight it was fine with us.
We had planned on continuing up the coast of Oregon to Astoria and then down SR 4 to the County Line RV Park on the Columbia River. Then the weatherman changed those plans in a hurry.
A storm was moving in and they were going to have 65 to 70 mph winds along the coast from Northern CA up into Washington. We do not like storms and will avoid them if at all possible. Which means we headed inland.
Normally, that would make me sad but this time it worked out really well. We stayed at the Washington County Fairgrounds in Hillsboro which just happens to be kind of close to my counsin, Gary, and his wife, Lynn. I called Gary and they came to pick us up for dinner. Their daughter, Jackie, joined us and a wonderful time was had by all. 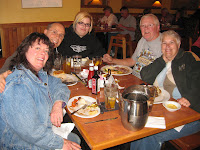 We hadn't seen Gary and Lynn for at least ten years and we had fun catching up on our lives and gossiping about other relatives. It definitely won't be another ten years until we see them again.
Posted by Jim and Sandie at 10:15 PM