BRIDGE OF THE GODS

After leaving the waterfalls, we stopped at the Char Burger 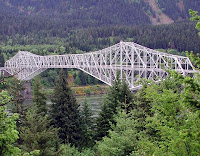 Restaurant which looks out over the Columbia River and the Bridge of the Gods.

The story behind the natural Bridge of the Gods is really interesting. According to Indian legend the Great Spirit built a bridge of stone that was a gift of great magnitude. Scientists say that about 1000 years ago the mountain on the Washington side of the Columbia River caved off blocking the river.

The natural dam was high enough to cause a great inland sea covering the inland prairies as far away as Idaho. For many years, natural erosion washed the dam out. The waters of this inland sea rused out, tearing away more of the earth and rock until a great tunnel was formed under the mountain range, leaving a natural bridge over the water. The bridge was called "The Great Cross Over" and is now named "The Bridge of the Gods."
The bridge that we could view outside the window of the restaurant was built by man in 1926.
Posted by Jim and Sandie at 7:04 PM