The Bloodiest Landscape on the Continent

The Battle of Fredericksburg: Confederates victorious. a town devastated, a Union army humiliated.

Fredericksburg is located midway between the Confederate capital of Richmond and the U. S. capital of Washington, DC. Over a period of 18 months, the Union army staged three major campaigns in this area resulting in four battles: Fredericksburg (December 1862), Chancellorsville (May 1863) and Wilderness and Spotsylvania Court House (May 1864). These battles resulted in 105,000 casualties making this area the bloodiest landscape.

We stopped at the Fredericksburg Battlefield Visitor Center and started our journey with an excellent 22 minute movie of the battle.

The Confederate soldiers under the leadership of  Robert E. Lee defended Marye’s Heights behind a stone wall in Sunken Road. 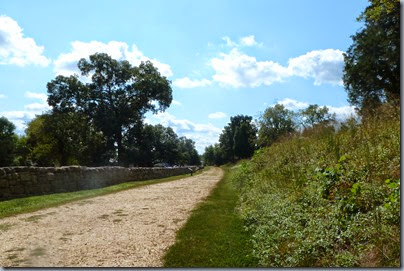 The Union army led by Major General Ambrose Burnside sent seven waves of attackers against the Stone Wall. Not one reached the Confederate line in the Sunken Road. The famous Irish Brigade came within 40 yards before they were destroyed. A total and complete defeat for the Union Army.

This is the view over the stone wall today. However, back in 1862, all of those trees weren’t there – it was a wide open field. 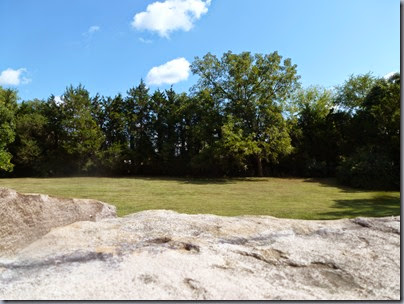 Can any of you tell me why the Union Army just kept sending men marching up to these walls to be slaughtered. There doesn’t seem to be any strategy involved – just march men up towards the wall and watch them be killed or wounded. I don’t understand.

This quote from Lt. Col St. Clair A. Mulholland just tore at my heart strings.

“In the lecture room of the Episcopal church eight operating tables were in full blast, the floor was densely packed with men whose limbs were crushed, fractured and torn. Lying there in deep pools of blood, they waited very patiently; there was no grumbling, no screaming, hardly a moan, many of the badly hurt were smiling, and chatting…The cases here were nearly all capital, and amputation was almost always resorted to. Hands and feet, arms and legs were thrown under each table, and the sickening piles grew larger as the night progressed…Towards morning the conversation flagged, many dropped off to sleep before they could be attended to, and many of them never woke again. Finally the only sound heard was the crunching of the surgeons’ saws and now and then the melancholy music of a random shell dismally wailing over-head.”

The Civil War pitted our country against itself. Brothers against brothers, fathers against sons. But there are also stories of great bravery and kindness. 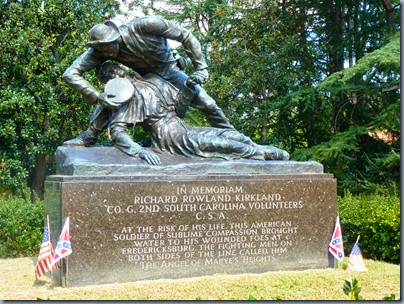 During the Battle of Fredericksburg on Dec. 13, 1862, Kirkland’s unit formed behind the Stone Wall and helped slaughter the Union attackers. Daylight on the 14th revealed a ghastly scene to the Confederates. About 8,000 Union soldiers had been shot in front of the wall and many of them remained where they had fallen. As hours went by without food, water or medical treatment, their suffering increased.

At some point in the day, Kirkland could no longer bear listening to the pleas for help, so he told General Joseph Kershaw, his brigade commander, that he would like to try and help the wounded Union soldiers. The surprised general at first refused the request, but he later relented. Kirkland gathered all the canteens he could carry and filled them at the near by water well. Then, at extreme risk to himself, he ventured out to help the Federal soldiers.

Also, located at this battlefield is the Fredericksburg U. S. National Cemetery which is the final resting place for more than 15,000 Union soldiers who died in the major Civil War battles that occurred between Washington, D.C. and Richmond.

After the region’s bloody confrontations, the remains of the Union and Confederate soldiers were buried in shallow, hastily dug, and often unmarked graves around the battlefields. 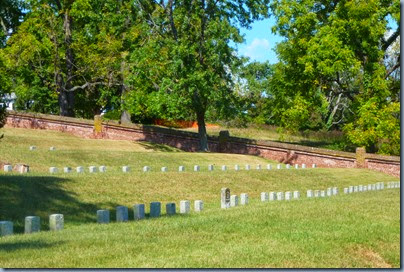 Shortly after General Robert E. Lee’s surrender at Appomattox, the U.S. Congress authorized the establishment of a national cemetery at Fredericksburg to provide a proper burial place for Union soldiers. 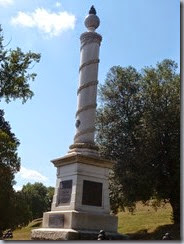 We’re hopefully going to visit at least one more battlefield while we are here. You could spend a couple of days at each battlefield and still not cover all of the conflict.